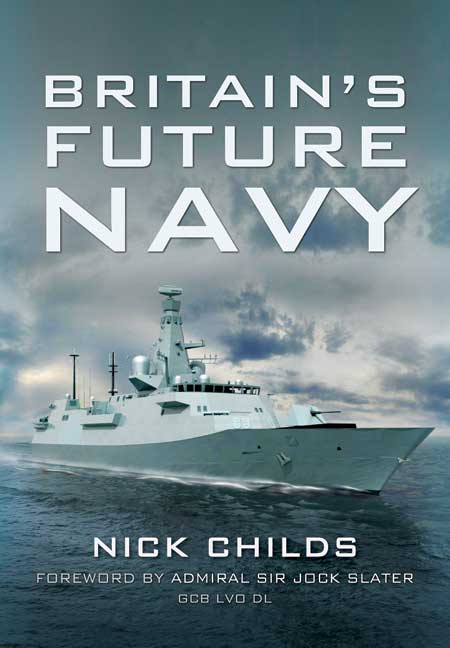 Add to Basket
Add to Wishlist
You'll be £14.99 closer to your next £10.00 credit when you purchase Britain's Future Navy. What's this?
+£4.50 UK Delivery or free UK delivery if order is over £35
(click here for international delivery rates)

What kind of Royal Navy does Britain need now? The 21st century promises to be one of huge uncertainties and challenges for the senior service. Does Britain have the right naval strategy to cope with emerging threats (does it have a naval strategy at all, and should it?) and, if so, does the Navy have the right ships and enough of them to implement it?
Nick Childs looks at the changing strategic environment (including economic difficulties and the growth of other navies such as China and India). He asks what Britain's role in the world could or should be – is she still interventionist? If so, should our forces be designed purely to work with US, UN or Western European forces? What are the options for a naval strategy? The author considers what kind of navy would be needed to support such options. What kind of ships are needed and how many? What of aircraft carriers and the nuclear option?
What are the technological developments affecting current and future warship design projects? Is the new Type 45 destroyer what is needed and worth the cost? Given the depths to which the RN has shrunk in terms of numbers, public profile, and strength relative to its peers, this probably is a critical period in terms of determining the RN's future.
This new paperback edition has been revised and updated to take into account the most recent developments and government defence decisions.

...The author's credentials as a well-established and authoritative journalist are clearly evidenced by his insightful and widely-sourced analysis. He succinctly summarises a broad range of often complex considerations whilst demonstrating in-depth knowledge of the underlying subjects. He has the ability to describe, for example, the key design features of the Type 45 destroyer and the inter-service infighting that impacted SDSR 2010 with equal clarity and credibility.

... Britain's Future Navy is a thoroughly researched, and well-thought-out review which should be required reading for anybody interested in the modern Royal Navy. In due course it would be good to see a further edition.

Relevant and incisive and easy to absorb.

Originally published in Hardback form in 2012, this is a well researched book that sets the scene of where the Royal Navy is today, and where it might go in the future.

The work gets off to a strong start with an interesting foreword... Britain's Future Navy is a thought-provoking and timely book.

Against the background of all the confusion, and the many new opportunities, a well-argued case for British naval power is a refreshing interlude and the reader will be able to compare its insights with what begins to unfold from May 2015.

… a well researched investigation into what kind of navy Britain needs in the 21st century. Childs weighs up the effect of the current economic climate, emerging technologies and new threats to world peace. This is the books greatest strength.
The book features some superb photos of what the future British Navy might consist of too. A unique book that deserves a wider audience.

I found this book very difficult to put down. Highly readable, the author has avoided the pitfalls of “acronym soup” and jargon. Challenging and simulating this book is a must for anyone with the slightest interest in the maritime debate and the future of the Royal Navy – and should be compulsory reading for all Mps!

For an island nation, and one with such a rich naval history, the vast majority of the public in Great Britain are remarkably unconcerned about the present state of the Royal Navy, let alone its future. In this book Nick Childs makes a gallant attempt to fuel a debate he thinks is vital for the country’s security into the 21st century.
Interesting comparisons are drawn between those European nations that still maintain some element of naval aviation and the fact that Britain will, for some time, be without any naval strike capacity, re-learning the lessons of flying planes off of naval vessels. The irony being of course that Britain invented the carrier.
Into this narrative Mr. Childs brings in the experience of the US Navy in re-shaping its fleet and re-defining its role and purpose. This is clearly relevant. But what I think many readers will find particularly interesting are the references, which sit throughout the book, to the development of the naval forces of nations which traditionally haven’t developed an ocean-going navy.
So if you are up for a well written, challenging and thought provoking read, give this a go; even if you are not the nautical type!

I found this book very difficult to put down. Highly readable.
Challenging and simulating this book is a must for anyone with the slightest interest in the Navy.

This book should be read by all those serving in any of our services, retired, interested in the Navy or involved in any way in organising defense or ordering and panning modern military operations. If you read nothing else, I say, please read and mark that.
Childs does not believe that he has all the answers himself; he wants the responsible people to listen to and weigh the evidence and decide. This is perhaps a greater service to the Navy than simply stating his own answers to the questions he poses. The reader will discover for himself the detail of what Childs has to say.
This is an important and necessary book and you should read it carefully, thoughtfully and soon.

Having provided an outstanding overview of the Royal Navy's mission over the past three decades, veteran BBC correspondent Nick Childs has now turned to the Fleet of today and tomorrow.