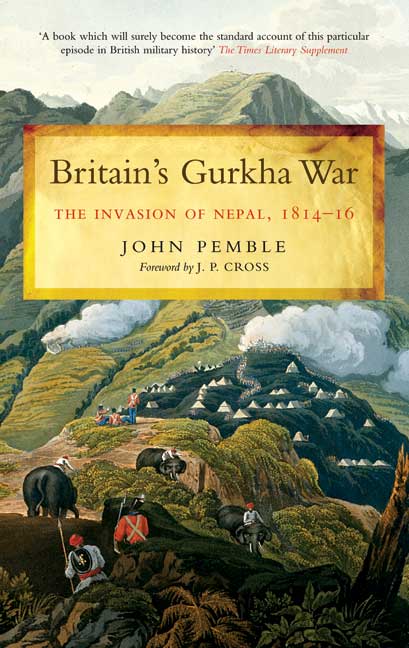 Add to Basket
Add to Wishlist
You'll be £19.99 closer to your next £10.00 credit when you purchase Britain's Gurkha War. What's this?
+£4.50 UK Delivery or free UK delivery if order is over £35
(click here for international delivery rates)

Order within the next 1 hour, 40 minutes to get your order processed the next working day!

The British love affair with the Gurkhas began during the early nineteenth century clash of the expanding English East India Company and Nepalese hillmen.

The remarkable fighting abilities of the Nepalese contrasted against the most incredible British ineptitude. But on both sides, the war was harder fought than either the Afghan War or even the struggle with the Sikhs. And on both sides, the most colourful characters were involved - such as the drinker, dicer, duellist Rollo Gillespie or the legendary Gurkha hero Bhakti Thapa.

In the end, the British wrested key hill tracts from the Gurkhas. As Sir David Ochterlony - perhaps the only figure who saved the British reputation - was poised to attack Kathmandu, the Gurkhas prudently made peace which maintained their kingdom as an independent state.

John Pemble's account is a comprehensive history of the conflict, detailing the origins of the war, the consequences of strategic errors, and the enduring impact of the final victory. Even before the campaign had finished, the nucleus of the Gurkha Bridgade had joined the East India Company's Forces.

This is a thrilling telling of a little-known war. John Pemble has fully authenticated his work from original sources and on-the-spot research, all presented in a lively, engaging style.


This edition has benefited from a foreword written by Lt. Col. John Cross, possibly the pre-eminent expert on the history and languages of Gurkas and Nepal.
Pemble has taken the opportunity to make some minor additions and corrections to his original work. It remains a detailed and comprehensive work of military history and a good read for those interested in Gurkhas and India.

It is not only a splendid historical record which everyone interested in India should have for reference but good reading and value for money as well.

John Pemble's well documented account is written in a most engaging style and should be of more interest to those interested in military history and/or in Indian history in general. It is thoroughly recommended.

John Pemble graduated from Clare College Cambridge and then carried out doctoral and postdoctoral research at the University of Pennsylvania, the School of Oriental and African Studies in the University of London, and the Ecole Nationale des Langues Orientales Vivantes in Paris. He is the author of a wide range of books, articles and reviews, and has taught at the Royal Military Academy Sandhurst, the University of Leicester, and the University of Bristol, where he was Reader in History and is currently Senior Research Fellow. His work has been translated into Italian, Japanese, and Hebrew, and in 1987 he was joint-winner of the Wolfson Literary Award for History.