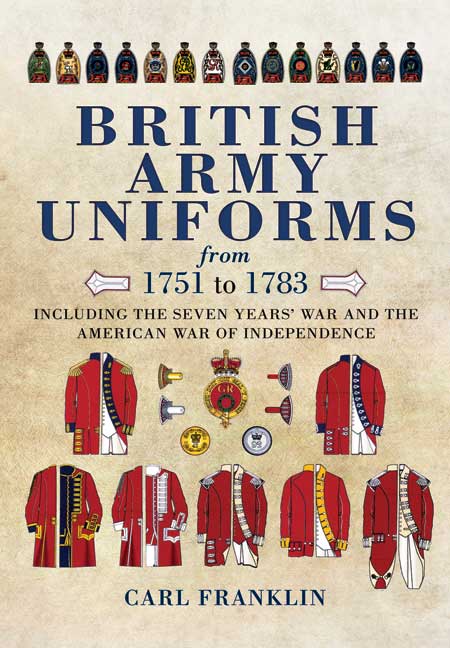 Click here for help on how to download our eBooks
Add to Basket
Add to Wishlist
You'll be £4.99 closer to your next £10.00 credit when you purchase British Army Uniforms of the American Revolution 1751 - 1783. What's this?
Need a currency converter? Check XE.com for live rates

Based on contemporary records and paintings, this book identifies each cavalry and infantry regiment and illustrates changes in uniforms, their facing colours and the nature and shape of lace worn by officers, NCOs and private soldiers from 1751 to 1783. Regiments that served in the American War of Independence are noted and the book includes more than 200 full-colour plates of uniforms and distinctions. Divided into four sections, it not only details the cavalry and infantry uniforms of the period but also the tartans of the Highland regiments, some of which were short-lived, and the distinction of the Guards’ regiments.

feast for the eyes with prolific, colourful imagery, the author identifies the uniforms worn by the British army from 1751 to 1783. In overwhelming detail, the author successfully explains who wore what, where and how, and with which accessories. The sheer amount of detail is staggering, yet it is necessary to include this as it helps the reader attain a truly comprehensive understanding of the breadth and depth of British army uniforms in the eighteenth century.

The book offers a fresh perspective and new research that add to the debate on uniform design and relevance.

Massively color illustrated literary horn of plenty… I can only hope that a second volume detailing 1784-1914 will be forthcoming!

This book will be of great use to anyone interested in the 18th Century British Army as well as the illustrators and other who need detailed information in one convenient source. The long title of the book is "A fully illustrated account of the uniforms and distinctions of each numbered regiments of cavalry and Infantry in the British Army with a full and complete list of regimental facings lace and distinctions including the tartan of the highland regiments". It is just that.

A work of incalculable value. A Uniform Guide of the most complete essentials for miniature painters.

Sure to become an indispensable too for any hobbyist seeking to identify or replicate period uniforms for military miniatures.

This is a amazingly detailed book and indeed has at least two strap lines to the main title: the first clarifies the time period concerned i.e. “Including the Seven Years’ War and the American War of Independence”; the second the books content i.e. “Including both cavalry and infantry an illustrated guide to uniforms, facings and lace”!

The author, Carl Franklin, is an ex-Royal Air Force engineer who specialised in guided weapons systems. Whilst that is some way from the books subject matter the attention to detail that job required has obviously prepared the author for writing and illustrating such a thoroughly researched piece of work.

I could not help but be massively impressed by the level of detail in this book and the amazingly high standard of the colour illustrations (with associated high production values for the book itself). If you are a wargamer painting up a British army of the late 18thcentury then this is an absolute must have. Ok a very narrowly focussed book but that focus is on one of the most interesting periods of British military history! Highly recommended.

To use the term “outstanding” in order to describe this work is a major understatement. The quality of the book is simply exceptional. In this detailed volume the uniforms of each cavalry and infantry regiment between 1751 and 1783 has been documented. The Coverage also includes the uniforms of the Seven Year's War and the American War of Independence.

Numerous and plentiful illustrations throughout the book and they feature the differences from regiment to regiment. The cuts and colourings of uniform clothing are given and the book enables one to see how they changed over the period of 30 years.

This remarkable volume is an essential and vital reference work for those researches, modellers, historians and re-enactors of the British Army of the eighteenth century. Without any shadow of a doubt this book is simply excellent. A terrific amount of research has gone into this book with a lot of time and effort and the end product is of a very high standard.

An illustrated book of British Army uniform from 1751 to 1783, and including the American War of Independence, this is a handsome and beautifully illustrated tome. It's not a book for sitting down with and enjoying a dramatic tale, nor would it be considered de rigeur for beachfront holiday reading, however, it is a most excellent reference book, with exquisite details of all British Army uniform of the period.

There are hundreds of illustrations, most in striking colour, of every variation on the uniform of the time, with painstaking detail of the accoutrements. There are sections on bridles, saddles and bits. Whole swathes on lace and cuffs and everything one might want to know about regimental facings. There are fascinating pieces on tartans, including some which have been lost or just discontinued.

If one has any interest at all in this period in history, or even a fascination with British Army uniforms and the evolution of the dress, then this is the book for you, probably the most comprehensive and accessible book of it's type on this subject.

Always informative and exceedingly educational, and presented beautifully. An superb book of its sort.

Occasionally, a publication will come along that will interrupt the work I am doing because it has impressed me with its depth of information, quality of writing, and excellence of graphics. The book that has currently done this is the British Army Uniforms from 1751 to 1783 by Carl Franklin.

When I first received the book I was not sure what to expect. However once I began browsing through the book, I was immediately impressed and knew that I had to get the information out to the wargamers, figure painters, historians, and uniformlogists of the world.

Here is a book that will really impress those with an interest in British Uniforms as it contains well written content and detailed drawings of the soldiers’ uniforms and equipment during this period of change in British history.

The information presented on the pages come alive for the reader as they are shown all the components of a Cavalry and Infantry soldier’s uniform and equipment of this period.

British Army Uniforms from 1751 to 1783 is an incredible piece of work. Aside from reading all of the interesting information that the author relates, you can spend hours just browsing the drawings. I cannot say enough about this book as it has left an impression and with the hope that the author moves onto other subjects and attacks them with the same thoroughness. You can tell from the authors writing that the uniforms of this period are something to which he has an affinity, and that he wants to share his research and knowledge with the world.

British Army Uniforms from 1751 to 1783 is the definitive book on this subject and has set a standard that will be difficult to surpass.

After service in the RAF as an engineer specializing in guided weapons, Carl Franklin worked for British Aerospace and Royal Ordnance until retiring in 1990. He now spends most of his time researching and writing and is the author of British Rockets of the Napoleonic and Colonial Wars 1805–1901; British Napoleonic Field Artillery and British Napoleonic Uniforms.