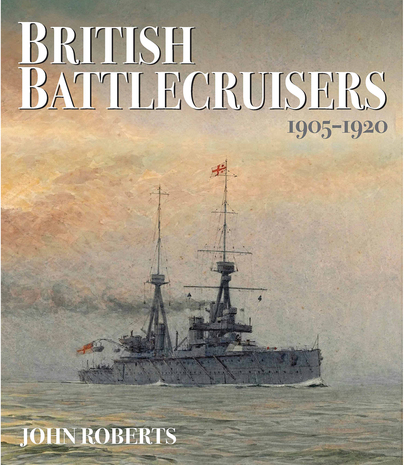 Add to Basket
Add to Wishlist
You'll be £35.00 closer to your next £10.00 credit when you purchase British Battlecruisers. What's this?
+£4.50 UK Delivery or free UK delivery if order is over £35
(click here for international delivery rates)

The brainchild of Admiral Sir John Fisher, battlecruisers combined heavy guns and high speed in the largest hulls of their era. Conceived as ‘super-cruisers’ to hunt down and destroy commerce raiders, their size and gun-power led to their inclusion in the battlefleet as a fast squadron of capital ships. This book traces in detail the development of Fisher’s original idea into first battlecruiser Invincible of 1908, through to the ‘Splendid Cats’ of the Lion class, and culminating in HMS Hood in 1920, the largest warship in the world for the next twenty years. The origins of the unusual ‘light battlecruisers’ of the Courageous type are also covered.

The well-publicised problems of British battlecruisers are examined, including the latest research throwing light on the catastrophic loss of three of the ships at the Battle of Jutland. The developmental history is backed by chapters covering machinery, armament and armour, with a full listing of important technical data. The comprehensive collection of illustrations includes the author’s superb drawings and original Admiralty plans reproduced in full colour. This revised and updated edition of the classic work first published in 1997 will be welcomed by anyone with an interest in the most charismatic and controversial warships of the dreadnought era.

It is good to see his book back in print with this improved edition.

... no disputing the quality of this book. Highly recommended.

A new and revised edition of John Robert's classic work on the Battlecruisers of the Royal Navy.
Excellent value and strongly recommended.

Unlike many other works on such vessels, this book concentrates on the technical aspects of the type. Numerous Photographs, Tables, Drawings, Plans and Diagrams, contribute to the narrative. In addition, a set of Original Plans In Colour of HMS Invincible appear in the middle of the work. Looking suitably nostalgic by virtue of the colours employed, these include a fold-out section and are supplemented by an additional monochrome plan (that of HMS Queen Mary, 1913). This resides in a specially-designed pocket inside the back cover.

The author is still the foremost authority on battleships from Dreadnought and, although
now retired, he continues to research the subject. This new edition of the definitive book on battlecruisers
has been updated with the latest findings from his research. A outstanding review of the subject.