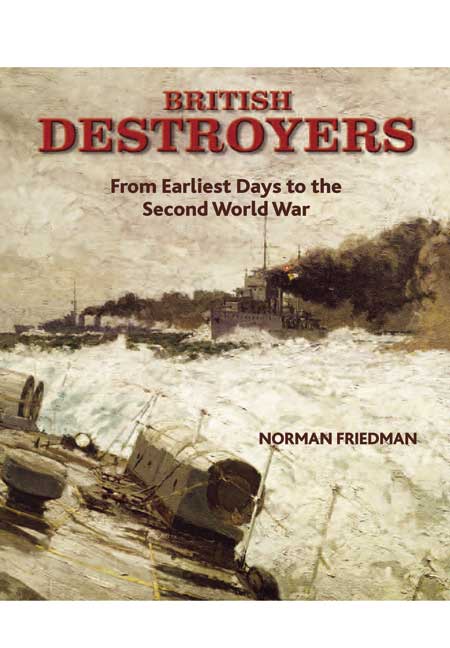 From Earliest Days to the Second World War

By Norman Friedman, Plans by A D Baker III

Click here for help on how to download our eBooks
Add to Basket
Add to Wishlist
You'll be £18.00 closer to your next £10.00 credit when you purchase British Destroyers. What's this?
Need a currency converter? Check XE.com for live rates

In the late nineteenth century the advent of the modern torpedo woke the Royal Navy to a potent threat to its domination, not seriously challenged since Trafalgar. For the first time a relatively cheap weapon had the potential to sink the largest, and costliest exponents of sea power. Not surprisingly, Britain's traditional rivals invested heavily in the new technology that promised to overthrow the naval status quo.

The Royal Navy was also quick to adopt the new weapon, but the British concentrated on developing counters to the essentially offensive tactics associated with torpedo-carrying small craft. From these efforts came 'torpedo catchers', torpedo-gunboats and eventually the torpedo-boat destroyer, a type so successful that it eclipsed and the usurped the torpedo-boat itself. With its title shortened to 'destroyer', the type evolved rapidly and was soon in service in many navies, but in none was the evolution as rapid or as radical as in the Royal Navy

This book is the first detailed study of their early days, combining technical history with an appreciation of the changing role of destroyers and the tactics of their deployment. Like all of Friedman's books, it reveals the rationale and not just the process of important technological developments.

Friedman’s ‘British Destroyers: From Earliest Days to the Second World War’ is a remarkably clear and lucid work on the early development of surface combatants – describing complex and sophisticated development activities in ways that should be understood by any professional or keen amateur. It is both a good read and illuminating. It is a work that helps us understand how modern surface combatants evolved into what they are today and helps us better understand warship design in a world where a sea fight is expected rather than a rare occurrence. ‘British Destroyers’ is highly recommended for the Australian audience.

if I had to choose any one book on the subject it would be this one. It is not only valuable for its technical pages and for its history of the people as well as the ships, it is also a rarity among this type of book for being highly readable just for the story. I recommend it to anyone who is interested in the story of the "footsoldiers" of the Royal Navy.

This book is the first detailed study of their early days, combining technical history with an appreciation of the changing role of destroyers and the tactics of their deployment. As well as Friedman’s excellent narrative, the ship plans by A D Baker III and drawings by Alan Raven are to be thoroughly commended. A classic.

A large book offering a comprehensive study, with many line diagrams by A.D. Baker III and interesting photographs. These complement accounts of all the destroyer classes, from the very first torpedo boats through to the torpedo boat destroyer phase to destroyers of the world wars. There are many excellent photographs, with lengthy captions to highlight salient points. The main text is complimented with any notes and class data at the back of the book, which is very useful. This is possibly the best book that I have read on the history of British Destroyers from 1880's. It is a must for anyone interested in the evolution of RN destroyers of that era.

Just like all of Norman Friedman's books this excellent volume, which is the end-product of meticulous research into primary sources, combines technical history with an understanding of the evolving role(s) of destroyers as well as the rationale and tactics of their deployment. Th book is extremely well illustrated throughout with superb black and white photographs as well as line drawings by AD Baker III and Alan raven. I have no hesitation recommending this outstanding book to all those interested in the evolution of the British destroyer from the original concept to mid 1930's. Excellent value for money - a must for the bookshelf.

A D Baker deserves considerable credit for his contribution to the very high quality of this book. His drawings are simply brilliant. A treasure of a book' All the usual scholarly thoroughness of Friedman combined with the works of art of Baker. Naval history simply doesn't get better. This beautiful book does them great credit.

An unrivalled balance of authoritative description, in-depth analysis, technical data and detailed illustration to make it the undoubted definitive history on British destroy design. It more than equals its publishers claim to be essential reading for any maritime or naval enthusiast.

Norman Friedman is very well known in the world of naval history. He has written many books on a variety of naval subjects. Your reviewer suspects, though, that destroyers are his favourites.

A D Baker is less well-known but he deserves considerable credit for his contribution to the very high quality of this book. His drawings are simply brilliant. All up, therefore, we have a treasure of a book. All the usual scholarly thoroughness of Friedman combined with the works of art of Baker. Naval history simply doesn't get any better.

Of course, the subject also helps. Britain's destroyers have been wonderful and exciting little ships, particularly in the early days. This beautiful book does them great credit.