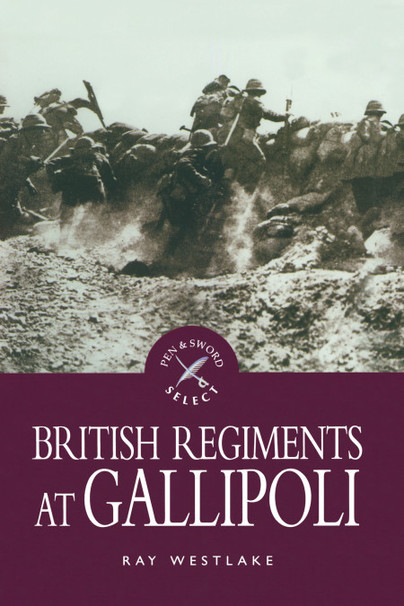 Click here for help on how to download our eBooks
Add to Basket
Add to Wishlist
You'll be £4.99 closer to your next £10.00 credit when you purchase British Regiments at Gallipoli. What's this?
Need a currency converter? Check XE.com for live rates

Following the huge success of British Battalions on the Somme (Leo Cooper 1994), Ray Westlake has now produced a source book of the same quality on the Gallipoli Campaign.

It has come about as a result of many years of enquiries, not only from researchers keen to establish what part each regiment had played in the battle, but from the family historian eager to know just where relatives had served.
Now that the Gallipoli Peninsula is more accessible, more and more people are visiting the area and forming an interest in this often neglected campaign. As with the Somme book, it is hoped that the family historian can once again ''follow in the footsteps'' of their grandfathers, fathers, uncles, etc.

While military historians can for the first time, in a comprehensive volume, access important information on a regimental and battalion scale. British Regiments at Gallipoli is an account of every infantry battalion and yeomanry regiment of the British Army during their service on the Gallipoli Peninsula.

Battles and engagements, along with movements both in and out of the line, are being dealt with at battalion level rather than on a larger and less detailed divisional scale.