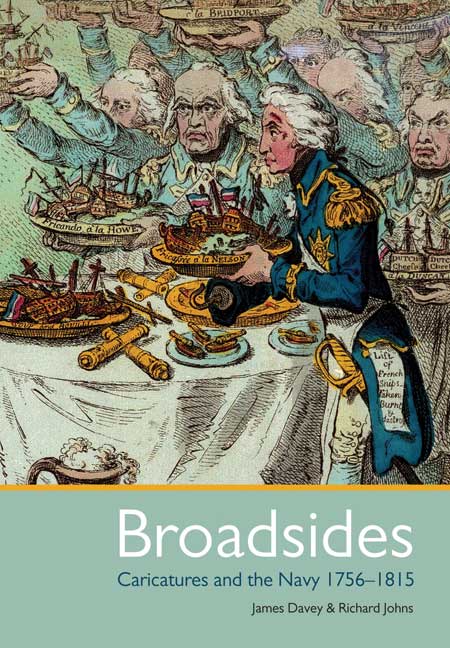 Click here for help on how to download our eBooks
Add to Basket
Add to Wishlist
You'll be £6.80 closer to your next £10.00 credit when you purchase Broadsides. What's this?
Need a currency converter? Check XE.com for live rates

Broadsides explores the political and cultural history of the Navy during the later eighteenth and early nineteenth centuries through contemporary caricature. This was a period of intense naval activity – encompassing the Seven Years War, the American War of Independence, the wars against revolutionary and Napoleonic France, and the War of 1812.

Naval caricatures were utilised by the press to comment on events, simultaneously reminding the British public of the immediacy of war, whilst satirising the same Navy it was meant to be supporting.

The thematic narrative explores topics from politics to invasion, whilst encompassing detailed analysis of the context and content of individual prints. It explores pivotal figures within the Navy and the feelings and apprehensions of the people back home and their perception of the former. The text, like the cariactures themselves, balances humour with the more serious nature of the content.

The emergence of this popular new form of graphic satire culminated in the works of James Gillray and Thomas Rowlandson, both here well represented, but a mass of other contemporary illustration makes this work a hugely important source book for those with any interest in the wars and history of this era.

This little volume is unique in focusing on the specific theme of naval caricatures across the period. As a result it comprises an important, extended scholarly essay on the subject with more than 80 fully identified colour illustrations.

Beautifully reproduced with detailed commentary. Extremely well-written and a most entertaining book. I can highly recommend.

Contains cartoons from the collection of the National Maritime Museum. Well presented in colour, they fall into two broad catergories: Swipes at the political establishment and ribald depictions of the drunken sailor and his effete officers. While some of the cartoons are familiar, there are also many that are being published for the first time. There is also an apposite and well-written text to explain the contemporary context.

Characteristic of this series, and many titles from this publisher, is the marriage of lavish high quality illustration with authoritative text. The work is beautifully illustrated thoughout, using well-known and previously unseen prints from the National Maritime Museum's collection. This is a lively and enjoyable book on so many levels. It deserves great success.