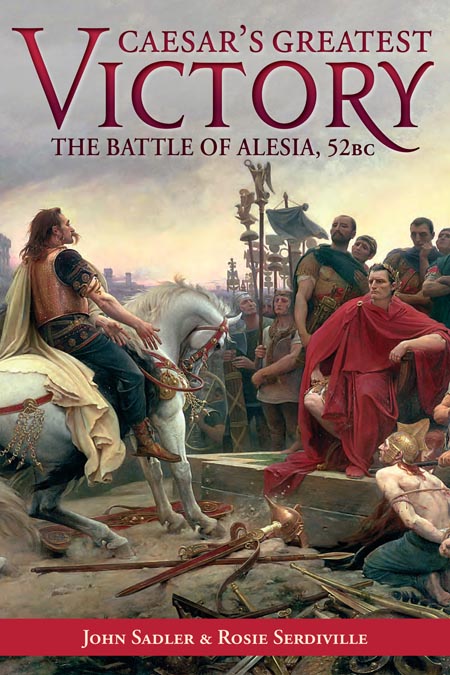 The Battle of Alesia, Gaul 52 BC

Add to Basket
Add to Wishlist
You'll be £19.99 closer to your next £10.00 credit when you purchase Caesar’s Greatest Victory. What's this?
+£4.50 UK Delivery or free UK delivery if order is over £35
(click here for international delivery rates)

The Battle for Alesia was a decisive moment in world history. It determined whether Rome would finally conquer Gaul or whether Celtic chieftain Vercingetorix would throw off the yoke and consequently whether a number of independent Celtic tribal kingdoms could resist the might of Rome. Failure would have been a total defeat for Julius Caesar, not just in Gaul but in the Senate. His career would have been over, his enemies would have pulled him down, civil war would have ensued, no dictatorship, no liaison with Cleopatra. Rome would not have become an empire beyond the Mediterranean. European, and therefore world history might have been a very different story.

Caesar’s campaign of 52 BC frequently hung in the balance. Vercingetorix was a far more formidable opponent than any encountered in Gaul; bold charismatic and imbued with strategic insight of the highest order. The Romans were caught totally off-guard and it seemed all too likely their grip on Gaul, which Caesar had imagined secure, would be prised free. The Siege of Alesia itself was one of the most astonishing military undertakings of all times. Caesar’s interior siege lines stretched for 18 kilometres and were surrounded by an outward facing line three kilometres longer, complete with palisades, towers, ditches, minefields and outposts. This work was completed in less than three weeks. Vercingetorix’s refuge proved a trap and, despite an energetic defence and the arrival of a huge relief army, there was to be no escape.

Caesar’s Greatest Victoryfully reveals both sides of the conflict, to explore in depth the personalities involved and to examine the legacy of the campaign which still resonates today. The arms, equipment, tactics and fighting styles of Roman and Celtic armies are explained, as well as the charisma and leadership of Caesar and Vercingetorix and the command and control structures of both sides. Using new evidence from archaeology, the authors construct a fresh account of not just the siege itself but also the Alesia campaign and place it into the wider context of the history of warfare. This is Roman history at its most exciting, featuring events still talked about today.