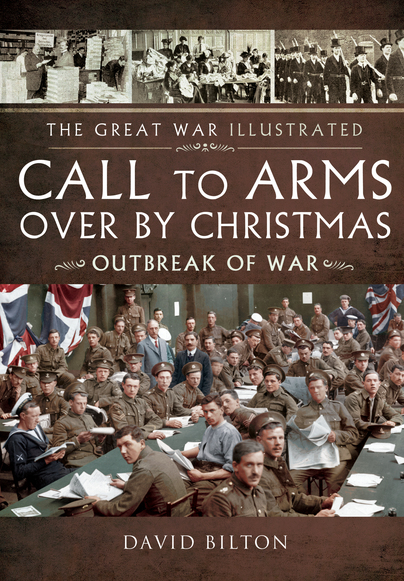 Call to Arms - Over By Christmas (Kindle)

Click here for help on how to download our eBooks
Add to Basket
Add to Wishlist
You'll be £4.99 closer to your next £10.00 credit when you purchase Call to Arms - Over By Christmas. What's this?
Need a currency converter? Check XE.com for live rates

For many years the Home Front was the Cinderella of the Great War. However, in recent years it has been acknowledged for the essential part it played in the successful prosecution of the war for the Allies. The same factors were at play in each of the warring states, but each reacted in its own ways to the demands.

This book builds upon The Home Front in the Great War, published in 2003, providing a fully illustrated account of every aspect of the civilian war. Much of it based around the experiences of two completely different places, Hull and Reading, showing that the experience of war was equally as hard and banal for both. The illustrations are usefully grouped into themes allowing the reader to compare life in different countries. A wealth of material is also included from across the United Kingdom, making this a book that will be of national interest.

Much of the material included has not been seen since it was first published almost 100 years ago, and many of the photographs have never been in print in this country, and some anywhere before. Also included are a selection of short articles from local papers, that show exactly what the general population was feeling and experiencing during the troubled years of the Great War.

What makes this book unique is that it is not only a home front history of Britain, but also a history of the warring nations and the neutral countries affected.

The book contains a multitude of black-and-white photographs that are used to tell the story. The text is limited with a few lines commentary on the photos and I think that adds to the impact – the author really has let the photographs tell the story – and it works brilliantly.

I liked that many of the photos selected had not been used before, you can read some books that cover this period and they are using the same stock images and I didn’t find it to be the case with this one.

I do really enjoy books of this nature and I thought that this one was superb, it is 5 stars from me – very highly recommended!

“Call to Arms” is profusely illustrated with photographs, artwork, ephemera, illustrations, cartoons, newspaper clippings and advertisements to show how life was seen through the eyes of those not in the military frontline. It ends with a day by day chronology of 1914, a bibliography and a good index.

he photographs are truly amazing and David Bilton’s text is superb, just right. It concentrates on the civilian side of the war, humanizing it in a way that text alone could not do. The illustrations have been gathered together into various themes and it really gives the reader an insight into life during the war in the various countries depicted.

A book that would appeal to a wide audience

One thinks of the Home Front mainly in terms of the Second World War, but David Bilton's memoir reminds us that there was an equally important home front associated with the first war, and with a series of unique photos, many never before pubised, he sets about telling us their story. Remarkable.