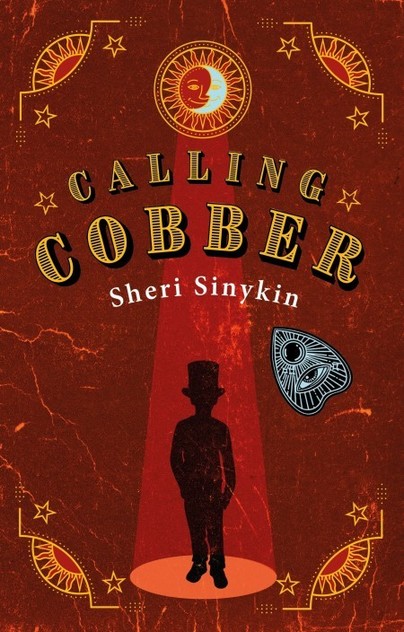 Click here for help on how to download our eBooks
Add to Basket
Add to Wishlist
You'll be £4.99 closer to your next £10.00 credit when you purchase Calling Cobber. What's this?
Need a currency converter? Check XE.com for live rates

Eleven-year-old Jacob 'Cobber' Stern has the world on his shoulders. He is still grieving for his mother six years after her death; frustrated by his distant workaholic father; abandoned by his best friend Boolkie, who now has to study for his barmitzvah; and overwhelmed by his sense of responsibility for his ailing almost one-hundred-year-old great-grandfather, Papa-Ben. On top of that, Boolkie is pressuring him to perform his magic act at the school talent show, a terrifying prospect given how badly wrong that went last time Cobber performed at school.

As Cobber navigates the multiple challenges of his life, he learns more about the people around him: why his father works so hard and Boolkie’s reasons for having a barmitzvah. In the process, he begins to understand more about himself and the threads that bind them all together. And as events force him to negotiate his complicated relationship with Judaism, he begins to see what it means to those he is closest to, and what it could mean to him.

Calling Cobber is about making decisions, answering life’s big questions, and working out how to process the past in order look to the future. Full of warmth and compassion and at once funny, emotional and profound, it is a touching, thought-provoking story of grief, faith, family and friendship.

I feel like I learned a lot about bar mitzvah's in this book. The author really delved into the purpose of the ceremony, what goes on, and whether you need to have one to be truly Jewish.

This is an interesting book that is worth a read if you’re specifically looking for Jewish-American realistic fiction or a tactful, sensitive portrayal of old age for a middle-grade reader who might have loved ones who are experiencing similar things.

I really liked this book, not only because it feels like this story could actually be happening anywhere in the world right now, but because of all of the relatable parts of the story. Cobbler is still grieving about his dead mother, on top of wanting to keep his friend, on top of his shyness about what people think about him. Anyone could have any number of the same problems he has and would find this book extremely helpful to find out how to get past it all. I hope you like the book!

It's the year 2000 and 11 year old Cobber has just started the 6th grade. He is still sad about his mother's death 6 years ago. He wants to be closer to his father but his father is always working. Cobber and his dad both spend time looking out for Cobber's 100 year old great grandfather Papa-Ben who lives in nearby Senior Housing. Cobber loves magic and wants to be a magician but is too shy to perform in front of anyone. Cobber also isn't sure of his identity or culture. His family is Jewish but they aren't pressuring him to make his bar-mitzvah and he isn't sure if he wants to. Basically, Cobber is having a rough time of life emotionally and feeling disconnected from his family.

A great read for the children and the pace of the story is wonderful as are the characters. I think this will be an emotional but exciting read for younger readers.

Sheri Sinykin has published twenty books for young readers since 1990, including eight in a young reader series called The Magic Attic Club, Giving Up The Ghost, a YA novel set on a haunted plantation after Hurricane Katrina, and Zayde Comes To Live (illustrated by Kristina Swarner) which has won several awards.

She grew up in Sacramento, CA and has worked variously as an intern at Cosmopolitan, a daily newspaper reporter, a hospital PR director, and the assistant executive director of the Madison (WI) Convention and Visitors Bureau. She received an MFA in Writing for Children in 2003 from Vermont College, for which she wrote a critical thesis exploring children’s literature with themes of loss, bereavement, and  She has a BA in Communications-Journalism from Stanford University.