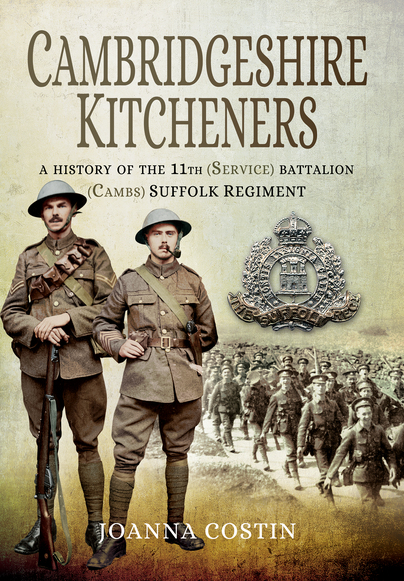 Click here for help on how to download our eBooks
Add to Basket
Add to Wishlist
You'll be £4.99 closer to your next £10.00 credit when you purchase Cambridgeshire Kitcheners. What's this?
Need a currency converter? Check XE.com for live rates

Whether farm labourers, shop assistants, bricklayers, chauffeurs, university scholars or college porters, men from all walks of life united and became the Cambridgeshire Kitcheners. Sent to the Western Front in January 1916, they took part in some of the bloodiest battles of the war, including the Battle of the Somme.

One hundred and eighty-seven men lost their lives on 1 July 1916, most within a few minutes of each other, as they marched over the top into no man's land and shell and machine-gun fire.

This was not the end of their story. In early April, the battalion saw fierce fighting during the Battle of Arras and in a doomed assault on a heavily fortified position near Roux at the end of the month.

In 1918 they resisted the German Spring Offensive, never falling back without orders, despite parts of the battalion becoming cut off and nearly surrounded during the fighting.

Mixing personal accounts with official documents, this is the story of the Cambridgeshire Kitchener's war. Their momentous efforts are explained throughout this book, which is a timely reminder of this heroic battalion's dedication, skill and bravery.


Joanna Costin is to be congratulated for her labours both in writing this book and also in remembering these same men of the 11th Suffolk Regiment on the Lives of the First World War site. This is another impressive title to add to the unit library built up by Pen & Sword over the years, and should be essential reading for anyone with an interest in this particular Kitchener battalion. The so-called 'pals' in this battalion; different in character from the better-known pals of northern industrial towns nevertheless had one thing in common with many of their compatriots: 1st July 1916. One hundred and eighty-seven 11th Suffolk men lost their lives on this day and many more were wounded. Photos of some of these men appear in this well-illustrated book, most taken from contemporary newspaper reports.

Long overdue, this new title documents the war journeys of the men from this East Anglian Kitchener battalion and the all too familiar fate that befell many of them.

A poignant reminder, as is given throughout the book with continued sensitivity, of the human impact of this war.

The author pays particular attention throughout to the personal story, and avoids, where not necessary, getting engrossed the wider theatre of the war, of which so much has been written already. To this end, this book serves a great purpose as a vital social history of the Great War drawing on an array of crucial and varied sources.

The author has an academic background and this is used to excellent effect in the range of sources used. The relevant battalion, brigade and divisional war diaries are referenced throughout and the material covering tactical developments is sourced, to a large extent, from the Imperial War Museum Archive. Local newspaper reports are quoted extensively and where there is a lack of certainty the author provides an appropriate caveat. The references relating to each chapter are laid out in a logical way and there is a useful appendix listing all of the men who are mentioned in the book. In the reviewers opinion the book would have benefited from a few maps – for those who are unfamiliar with the geography some of the movements are a little hard to follow. Also the description of the battalion’s involvement in the 1918 Kaiserschlacht may have resonated more had some of the more candid observations articulated by Cambs Suffolks veteran F. Haydn Hornsey in his book Hell on Earth been used (though his diary is quoted).

By blending the unit history with a vivid description of the impact on the home front and an excellent articulation of the strategic and tactical context the author has produced a book that will inform and entertain at all levels. This book will go a long way towards restating what the people of Cambridgeshire knew in the immediate post war period – that the men of the Cambs Suffolks deserve a huge amount of recognition and appreciation for all that they achieved during the 1914-18 war.

Joanna Costin read history at the University of Cambridge, where she first became interested in the Pals battalions. After graduating, she moved to Cambridge and began researching what happened in the county during the First World War. She works as a house parent and history teacher at an international school in Cambridge.