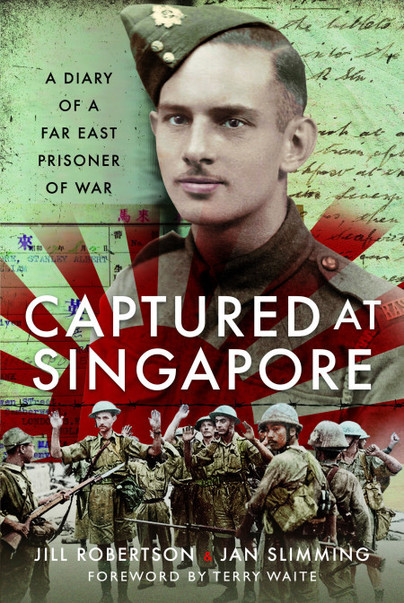 A Diary of a Far East Prisoner of War

Click here for help on how to download our eBooks
Add to Basket
Add to Wishlist
You'll be £9.98 closer to your next £10.00 credit when you purchase Captured at Singapore. What's this?
Need a currency converter? Check XE.com for live rates

What would it be like to leave your loved ones behind knowing you may never see them again? Then depart on a ship in the dead of night heading for an unknown destination and find yourself in the heat of a battle which concludes in enemy conditions so terrible that your survival in captivity is still under threat?

Cultivated from a small, faded, address book secretly written by a young soldier in the Royal Army Service Corps, Captured at Singapore, is a POW story of adventure, courage resilience and luck.

In 1940, Londoner Stanley Moore became Driver T/170638 and trained for desert warfare along with many others in the British Army’s 18th Division. Their mission, they thought, was to fight against Hitler and fascism in the Middle East. But in a change of plan and destination, he and his fellow servicemen became sacrificial lambs on a continent much further from home.

After tough rudimentary combat training in England, Stan’s division set off on a secret overseas mission. After months at sea, and several unexpected ports of call, their convoy was redirected to the other side of the world as the Imperial Japanese Army rampaged across Manchuria, Hong Kong and other parts of Asia. Singapore was under sole British jurisdiction and a large naval base had been built after the First World War to defend the island at the foot of the Malay Peninsula. The British Government believed Japan would never attack their prize territory and so left Singapore to fight for itself with limited troops and outdated equipment. But after an attack on Pearl Harbor, the under-trained and undersupplied 18th Division was redirected to fight the Japanese.

Using extensive research and personal documents, the authors’ account - via their father’s small, faded, diary and his 1990 tape recording - tells of Stan’s journey and arrival in Keppel Harbour under shellfire; the horrific 17 day battle to defend the island, the Japanese Admonition and the harrowing forced labour conditions after capitulation.

Only a small percentage of the 85,000 British troops returned after the war. Captivity and years of trauma ultimately stole years of the young soldiers’ lives, which they were later ordered to forget by the British Government. The aim of this work is to provide information for future generations to understand how ordinary men died under horrific conditions of war, and how the lucky survived.


'Captured at Singapore', written from notes made by Stanley Moore, whilst prisoner of the Japanese in WWll,
The notes were found hidden in his prayer book. Moore was a driver with the ill-fatted 18 Division which disembarked in Singapore, as reinforcements day before Britain's 'Pearl of the East' 90,000 garrison surrendered to the Japanese 30,000 army, led by General Yamashita. From these notes, and further research, Stanley Moore's two sisters, Jill Roberts Jan Slimming, produced a fresh look at the horrific conditions suffered by the POWs in Singapore and elsewhere.

In London on a cold February day, Winston Churchill, Prime Minister looked at his briefing papers. In recent months the British Army in Norway, had been overwhelmed, the survivors of the British Expandatory Force in France were rescued from the beaches of Dunkirk. Now, with little love in the air, Churchill, Prime Minister, stood up in Parliament to announce to a silent House 'that the Singapore garrison had surrendered'. Some 90,000 British and colonial troops were in Japanese hands.

'Escape from Singapore' is a comfortable read and a page turner.

‘Captured at Singapore’ is an account from a side of history I know very little about; an individual held as a Prisoner of War in the Far East following the Second World War.

As a history student; Primary Sources are invaluable, and so the authors have helped greatly by offering an additional one.

A mother of two young adults, Jill Robertson was raised in Surrey, but lived in Toronto, Canada, during the 1970s. She later returned to England to pursue a career in office administration, office planning and, ultimately, passenger services for United Airlines.  Interest in her father’s time as a ‘prisoner’ during the Second World War grew after she encountered FEPOW Fergus Anckorn in 2012. Since then, she has contributed enthralling articles for newspapers and newsletters. Jill is West Sussex Area Co-ordinator CoFEPOW (Children of Far Eastern Prisoners of War) and WASPI (Women Against State Pension Inequality). Her later years are now more active than expected. She lives with her partner in Northampton. This is her first book.