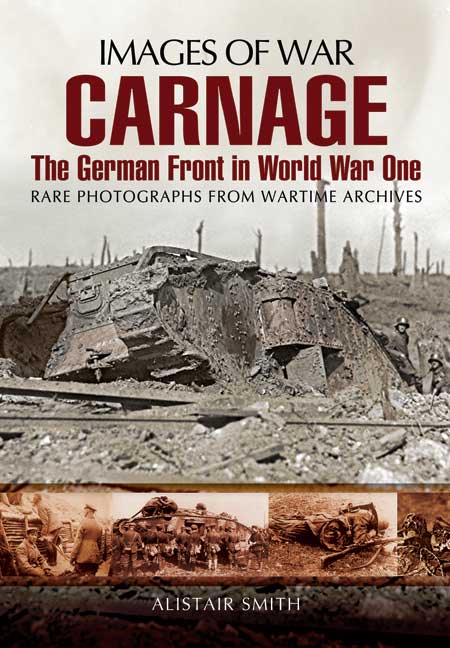 Carnage: The German Front in World War One (Kindle)

Click here for help on how to download our eBooks
Add to Basket
Add to Wishlist
Get Carnage: The German Front in World War One (Kindle) for FREE when you purchase 2 other eBooks.
Need a currency converter? Check XE.com for live rates

These amazingly well preserved photographs originate from German collection. They cover the full gamut of the dreadful conditions that all troops involved in that ghastly war experienced between 1914 and 1918. The collection portrays life and conditions in the German trenches, the carnage of the wrecked villages and buildings in which they lived and fought and views of the destruction wrought by the Allied offensives. Many of the photos show downed British and French aircraft and often with their crew, dead or alive. Captured British and French troops are seen being held before shipment to PoW camps well behind the lines. The utter destruction of the country surrounding the Front is difficult to comprehend

This is not a book for the feint hearted since it clearly portrays the true horror of World War One as experienced by the German Army.

I’ve been banging my drum about this series of books for a while now and I’m not ashamed to say the song remains the same in this review.

So what about the snaps? Well, they are fantastic. The quality and the range is stunning. Once again, though, the key to all this are the captions and Alistair Smith has done a fantastic job of explaining the minutiae of German uniforms and equipment and the places the soldiers found themselves in.

It might be you are just setting out on the Great War trail and if so, then this is a really great place to start because so much of what we read concentrates on the British experience. If you go deeper into the German experience you will come into the orbit of Jack Sheldon, but until then, books like this are a grand slice of nursery slope. If you are a veteran then this will just reinforce why you were here in the first place. It is a winner all round.

Another in the highly collectable 'Images of War' series of books featuring a collection of rare photographs from wartime archives, many previously unpublished. This work features images from an album belonging to an unnamed German infantry soldier portraying life and conditions in the German trenches in all its varied aspects.
Well worth a look 9/10

Carnage s a pictorial history of German Experiences on the Western Front. It contains over 1000 good quality black and white photographs with notes and annotations by the author.

Overall this is an interesting book for the World War One enthusiast.