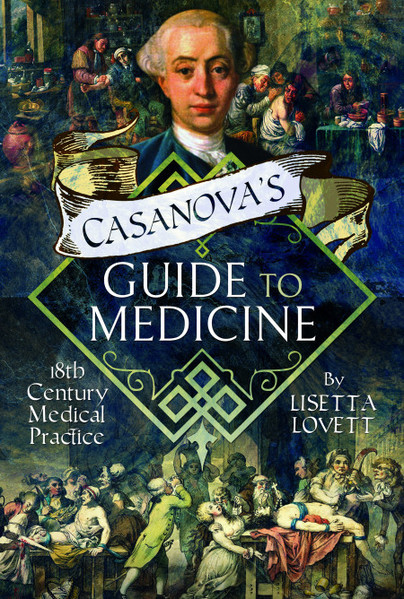 You'll be £4.99 closer to your next £10.00 credit when you purchase Casanova's Guide to Medicine. What's this?
Need a currency converter? Check XE.com for live rates

Giacomo Casanova's (1725-1798) reputation as libertine has sadly eclipsed his talents as scholar, linguist, prolific writer and manqué doctor. Fortunately for us, he wrote his memoirs at the end of his life on the advice of his doctor to control his propensity to depression. Although these often have been harvested for information on political, cultural and social aspects of his time, the insights they give about medical practice and the lived experiences of illness have been largely neglected.

This book addresses this deficiency through exploring in detail what Casanova wrote on a variety of conditions that include venereal disease and female complaints, duelling injuries, suicide, skin complaints and stroke and even piles. These descriptions provide alternately grim and amusing insights about public health measures, the doctor-patient relationship, medical etiquette and the dominant medical theories of the era. To help the reader understand the historical significance of the medical subjects covered, the author integrates throughout the book an extensive historical context drawn from contemporary sources of information and current history of medicine literature

"This work is highly recommended to update us on a neglected epoch of medical history and should appeal to a wide audience."

Casanova's Guide to Medicine: 18th Century Medical Practice by Lisetta Lovett was an amazing read that was full of historical health and medical information. Extremely fascinating.

This was a really interesting book, I enjoyed reading this book. I enjoyed getting a glimpse of Casanova's life.

I always enjoy titles from Pen and Sword, and this book was no exception. Casanova's Guide to Medicine utilises the extensive journals, memoirs and letters written by Giacomo Casanova to explore medicine and disease during the course of his life, which spanned three quarters of the eighteenth century.

The book starts with a brief overview of Casanova's life, before proceeding to explore different topics relating to the body, medicine, and illness. Because Casanova was a keen observer, and interested in matters of health, his writings contain a wealth of information about such topics. Lovett uses quotes as a stepping stone to explore treatments, medical theories of the time, and people's social and cultural attitudes toward various aspects of their bodies and health.

The writing is easy to read, and very accessible for a general audience. I would recommend this book for anyone who has an interest in the history of health and medicine.

This book was a thoroughly good read, and certainly an interesting read to see what the contemporary thought of medicine was at the time of Casanova in the 18th century. It was a fascinating book in that some of the diseases and medical problems we now know a lot more about, but it was good to read how people looked at the problems then. This book has some great little details and stories, I particularly enjoyed reading about the Bolognese Itch and how it showed that if people just cleaned and bathed themselves that would sort half of the problems out. I enjoyed the way this book was written and it didn’t feel too formal either, a really good read that I would happily recommend to others.

Casanova’s Guide to Medicine offers an informative and enjoyable view into both the eighteenth century as well as the life of one of its great writers and adventurers. History students, Casanova admirers, medical professionals, or anyone with a curiosity about such complaints as the pox, Green sickness, apoplexy, and the Bolognese Itch will spend diverting hours with this book.

"It reminds us that Casanova was a remarkable character who deserves to be remembered for more than his amorous adventures".

Historians have usually shied away from using Casanova’s lengthy memoirs as a source. At worst, they have been dismissed as a tissue of lies; at best they have been assumed to contain little but a tedious farrago of amorous encounters. Lisetta Lovett is to be congratulated on demonstrating that the memoirs should be read by every social and cultural historian of the eighteenth century for the information they reveal about polite society, popular mores and the limitations of contemporary scientific and medical knowledge.

Lovett is specifically interested in what the memoirs can tell us about the theory and practice of medicine. The contours of the history of medicine in the eighteenth century are now well-drawn, thanks in particular to the work of the late Roy Porter. Even though this is seen as a period of patient power when the sick and self-diagnosed gadded from doctor to doctor in search of a palatable cure, we still have a primarily top-down picture of medical practice in the eighteenth century. Sources, such as Casanova’s memoirs, which record in detail and over time the ailments and treatment of a lay individual and his friends, are relatively rare and under-exploited. Lovett’s book therefore is a useful addition to the existing literature. The fact, too, that the author is a retired medical consultant greatly helps the reader understand how deeply rooted in his own age Casanova’s medical opinions and experiences were.

Casanova’s commitment to the Enlightenment shows through in his support for free love, his dislike of homosexuality, judged unnatural by the philosophes, and his interest in contraception. He was also a great believer in patient power. Very few medical practitioners met with his approval, and he was happy on many occasions to ignore their advice, notably when he rightly refused to have his lower arm amputated when wounded in a duel. But at the same time, he was a medical conservative. His own understanding of pathology and therapeutics was based on the humoral theories of Hippocrates and Galen: he read the works of Boerhaave, the leading iatromechanist of the first part of the eighteenth century, but his accounts of disease do not suggest he had imbibed the latest mechanical or chemical explanations to any degree. In this respect he was no different from most lay patients of the period whose medical philosophy was out of date, though no more mistaken than the views that replaced them.

Sadly, Casanova’s memoirs finish in 1774. He died before he had time to write up the events of the last part of his life. We have no account therefore how Casanova dealt with his own physical decline and the remedies he took to slow it down or make his final hours more comfortable. This, though, does not detract from the value of this bottom-up study of one of the most infamous, mobile and learned (he translated the Iliad into Italian) figures of the Age of Enlightenment. It will be enjoyed by all historians of early-modern medicine.

This book details the memoirs of Giacomo Casanova (1725 – 1798). He is principally remembered and renowned as a promiscuous libertine, with an insatiable sexual appetite, but he was also a talented scholar, writer and philanthropist.
The author manages to aptly describe the context of the day, in the height of the Enlightenment. This provides the reader with a greater understanding of the current social and political mores.
The author details a comprehensive list of ailments and the remedies adopted. Chapter 12 includes an excellent summary of the development of medical and philosophical thought from the days of Aristotle and Hippocrates.
The book can be used as a reference to learn about specific illnesses or surgical procedures, without reading the whole text, from cover to cover.
I was fascinated with the section on the oculist’s box and cataract removals in chapter 9. A fellow Italian, Tadini, claims to be able to replace the work of the eye lens using minute round crystals. He is a charlatan, which was quite a common phenomenon of the time. However an English oculist John Taylor successfully inserts an artificial porcelain eye for a young girl who had lost an eye from smallpox.
It is a very enjoyable and easy to read book. The author shows a real depth of medical knowledge. I would recommend it to all those interested in the history of medical practice, particularly 18th Century medical practice.

My views have been broadened as a result of this book. Nonfiction and History fans really should read this fascinating and informative book... the information contained is absolutely amazing.

Lisetta is a retired National Health Service medical consultant psychiatrist whose first degree in physiology helps her interpret significant medical texts of the 17th and 18th centuries. As a medical student at Guy’s Hospital, London she took a Diploma in history of medicine. She maintained her interest in the subject resulting in a co-authored book on the history of medicine for busy health tutors and several academic talks in both the UK and USA. She has co- authored a book on medical ethics and has numerous publications in her specialty in academic journals. She was also a medical educator and as such introduced medical humanities to the undergraduate curriculum at Keele Medical School, allowing students to research the interface between any humanities discipline and medicine.