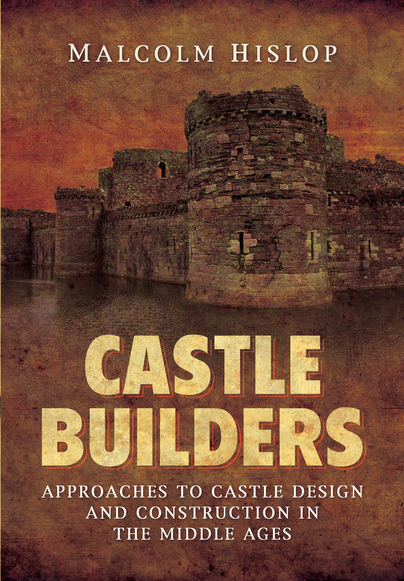 Approaches to Castle Design and Construction in the Middle Ages

Add to Basket
You'll be £25.00 closer to your next £10.00 credit when you purchase Castle Builders. What's this?
+£4 UK Delivery or free UK delivery if order is over £30
(click here for international delivery rates)

In Castle Builders, Malcolm Hislop looks at the hugely popular subject of castles from the unusual perspective of design and construction. In this general introduction to the subject, we discover something of the personalities behind their creation - the architects and craftsmen - and, furthermore, the techniques they employed, and how style and technology was disseminated. Castle Builders takes both a thematic and a chronological approach to the design and construction of castles, providing the reader with clear lines of development. Themes include earth, timber and stone construction techniques, the evolution of the great tower, the development of military engineering, the progression of domestic accommodation, and the degree to which aesthetics contributed to castle design.

Superbly detailed, with loads of colour photographs and diagrams, this is a fascinating read for fans of both history and architecture.

This is a very welcome, important and essential addition to the castellologists library.
Throughout Castle Builders the reader can sense the respect and affection Hislop has for the personalities and skills of the medieval master builders and their crafts.

With lavish colour photography throughout, it is a pleasure to read.

Architectural details and military engineers are naturally in the foreground and castle communities in the background, but the execution is superb, the detail and the text accurate, incisive and navigable. The result is a volume that is going to be consulted rather than pushing debates in different directions, but it serves a very useful purpose, will stand the test of time, and fills a gap in the existing literature.

There's no shortage of books on castles, many of them derivative or dull. This is neither...

... The best book on castles for some time.

Malcolm Hislop’s Castle Builders
Approaches to Castle Design and
Construction in the Middle Ages (Pen and
Sword Books) is a sound and solid text, very
readable and with good detail. Pen and
Sword Books have done an excellent job
with the quality of the illustrations and I
would now suggest this book as the standard
introductory text for the intelligent reader
although it also contains much of value for
advanced student of castle studies.

Have you ever looked at a castle and wondered who designed it and how? This new book covers, "approaches to castle design and construction in the Middle Ages" and explains how different eras gave rise to different techniques.

This is an excellent book on castles for both the enthusiast and the casual reader alike. A major appeal of this book is it deals with castles from the perspective of their design and constructions. So, rather than dealing with knights and sieges, ‘Castle Builders’ deals with the men behind the scenes; masons, architects, craftsmen.

As you read the book you will learn much about the evolution of castles. The book is beautifully designed and illustrated.

Overall, a fine edition to the library of anyone interested in castles.

This book is almost exclusively concerned with British castles (the Tower of London, Dover Castle, and the Conwy Castle are featured heavily), but there are also a few northern French examples, and the occasional site elsewhere in Europe. With an impressive range of features from specific castles across the country analysed, and clear photographs and diagrams, this is a good guide to the lasting contributors of medieval castle builders.

I liked it a lot. A very interesting work both for those who simply seek knowledge on a subject as transcendental as the castles and fortresses, and for those modellers, including myself, who try to document as much as possible when it comes to recreating our constructions in miniature.

Obviously the most concentrated period of castle building occurred shortly after the Norman invasion in 1066. Author Malcolm Hislop uncovers some fascinating facts about the people who designed and built the amazing fortresses that have survived to the present day.

This encyclopaedic work provides a comprehensive and in-depth coverage of the Medieval Castle and is likely to become a standard reference work on the subject. It will appeal to anyone with an interest in both castles per se and the ‘Medieval era’ / ‘Middle Ages’ in general.

A look at the hugely popular subject of castles from the unusual perspective of design and construction. In this general introduction to the subject, we discover something of the personalities behind their creation - the architects and craftsmen - and, furthermore, the techniques they employed, and how style and technology was disseminated.