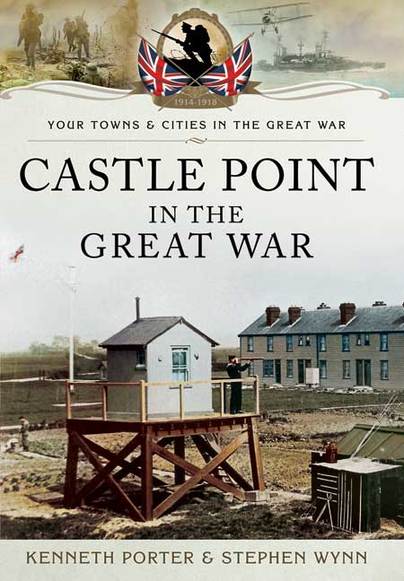 Click here for help on how to download our eBooks
Add to Basket
Add to Wishlist
Get Castle Point in the Great War (Kindle) for FREE when you purchase 2 other eBooks.
Need a currency converter? Check XE.com for live rates

A brief history on the various parishes that make up the Borough of Castle Point and what life was like prior to 1915. It includes stories of suspected aliens, conscientious objectors (The peculiar People), those who claimed exemption for business reasons and British overseas internees.

Although a book primarily intended for those interested in local history, I found it an extremely enjoyable read, probably because of the inclusion of invaluable newspaper reports, photographs, handwritten accounts and poems.

An illuminating account of South East Essex from 1914 to 1918, from where nearly 200 men lost their lives.

Part of the excellent 'Your Towns & Cities in the Great War' series, this volume records the memories and recollections of those who served and returned home. It also tells of the 189 men from the area who fell. Included throughout are wartime newspaper reports recounting daily life and telling of the sacrifices of those left at home. All aspects are covered including the role of women, the conscientious objectors and those exempt from serving in the military.

'...it is a story of sadness and loss and the horror of conflict in the trenches. Yet once again you come away from the book moved by the guts, the endurance and, not least, the humour under stress of so called "ordinary" Essex people.'

'Their research makes good use of local family collections, and - always a rich source material - the letters pages in local newspapers.'