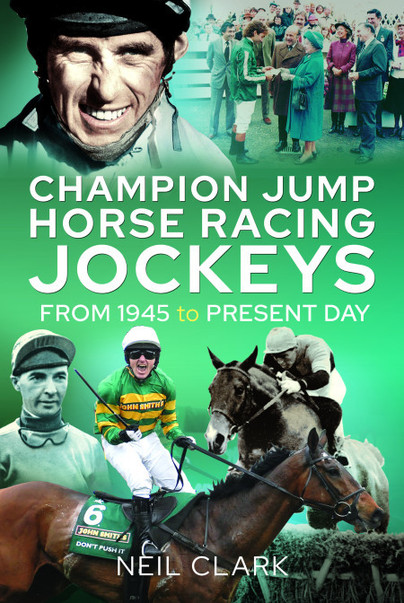 Click here for help on how to download our eBooks
Add to Basket
Add to Wishlist
You'll be £9.98 closer to your next £10.00 credit when you purchase Champion Jump Horse Racing Jockeys. What's this?
Need a currency converter? Check XE.com for live rates

‘It’s one of the real sports that’s left to us: a bit of danger and a bit of excitement, and the horses, which are the best thing in the world.'

This book traces how much National Hunt racing has changed since 1945- and also how Britain has changed too. The advent of motorways has made travel easier and racecourse safety has improved but the challenges for jump jockeys -the bravest of the brave- remain. It covers some of the biggest stories in jump racing over the last seventy-five years, including the dramatic collapse of Devon Loch in the 1956 Grand National and the incredible exploits of three-times Grand National winner Red Rum. But it also contains lots of fascinating stories which the reader will not be so aware of, of trainers and horses long forgotten.

Neil Clark is a journalist, broadcaster, author and award-winning blogger. He has contributed numerous articles to leading newspapers, magazines and websites including the Guardian, Daily Mail, Daily Express and the Racing Post and is a regular pundit on current affairs and sport on television and radio. He is the author of Flying Ace: A Racing Legend (1992), Stranger than Fiction, the biography of Edgar Wallace (2014) , and also contributed to the Great Racing Gambles and Frauds series.