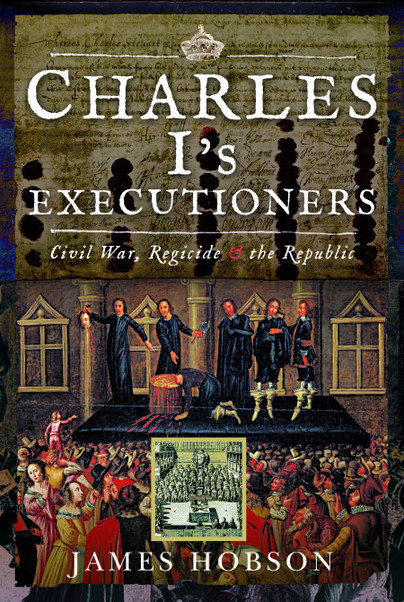 Click here for help on how to download our eBooks
Add to Basket
Add to Wishlist
You'll be £4.99 closer to your next £10.00 credit when you purchase Charles I's Executioners. What's this?
Need a currency converter? Check XE.com for live rates

An interesting book and one well-worth adding to your bookshelves.

Hobson manages to thrill... Another great book on the Civil War by James Hobson.

James Hobson takes a look at the other characters who signed the document that led to the execution of the tyrannical King, Charles I, in 1649 following a long and bitter civil war. We all know about Cromwell, of course, and some of the signatories are also well known to us from the annals of the civil war and from the trial records. But there are many more signatories, of whom we know very little indeed, and James's book sets the record straight by examining their lives and how they came to be involved in signing the death warrant for a man who claimed to have been appointed King by God himself. A brilliant book.

An excellent, very readable, account of the events of the English Civil War and its aftermath. The author set out to provide information on each of the 59 men who signed Charles I's warrant of execution. The result could easily have been a muddled, repetitive account. Instead the author handles the information in a very clear and professional manner; the men are grouped sensibly - some chapters deal with up to 6 names, some only one. While detailing their lives and motives (where possible) the author takes the reader through the events of the Civil War and the Restoration of the monarchy, giving a great insight into life and beliefs of that time.

It is fascinating to learn more about who signed the death warrant - clearly some important people ducked the issue, and some men were brought forward almost to make up the numbers. Signing the document had serious impact on their future lives, as well as on the course of history itself. The author describes their lives, where he can - some were real nonentities about whom little is really known - and explains what they did after. Some prospered, some were brought to trial and some died horrible deaths for their beliefs.

Thoroughly enjoyable and informative, a scholarly and interesting book for anyone at all interested in learning more about the Civil War and the men who fought and died.

If you'd like to know more about the people who fought on the side of Parliament in the Civil War, and understand their motivations, this book is well worth reading.

The execution of Charles I

The execution of Charles I by beheading occurred on Tuesday 30 January 1649 outside the Banqueting House in Whitehall. This trial and execution were the first of their kind.