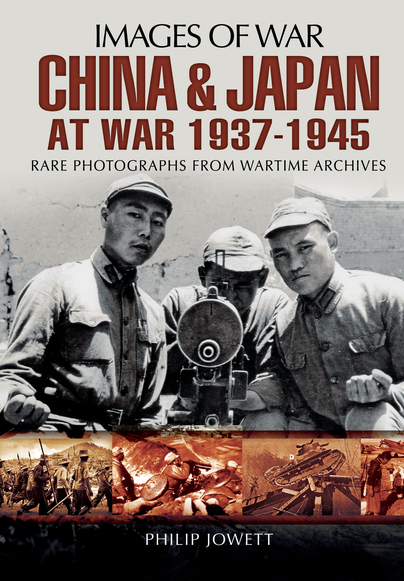 Click here for help on how to download our eBooks
Add to Basket
Add to Wishlist
You'll be £4.99 closer to your next £10.00 credit when you purchase China and Japan at War 1937 - 1945. What's this?
Need a currency converter? Check XE.com for live rates

The 1937-1945 war between China and Japan was one of the most bitter conflicts of the twentieth century. It was a struggle between the two dominant peoples of Asia. Millions of soldiers fought on each side and millions of soldiers and civilians died. Philip Jowett's book is one of the first photographic histories of this devastating confrontation.
Using a selection of almost 200 historic photographs, he traces the course of the entire war – from the Japanese invasion and the retreat of the Chinese armies and their refusal to surrender, to the involvement of the Americans and the eventual Japanese defeat in 1945.
His graphic account is an absorbing introduction this often-neglected theatre of the Second World War. The images show the armies on all sides and the weaponry and equipment they used. But they also record the experience of the troops, Chinese and Japanese, and of the Chinese civilians who suffered terribly through eight years of war.

The pictures are well chosen, and show all three of the major armies in some detail (Nationalist, Communist, Japanese), as well has having some pictures of the various puppet armies that fought for the Japanese. The captions are informative (not always the case in photo books!), with good details on what we are seeing, and what it says about the course of the war at that time. The result is a valuable introduction to this brutal conflict.

The brutal war in China is often neglected by both historians and wargamers in the west, yet the author has provided an absorbing yet graphic account of this conflict that ravaged China.

This photo book contains many pictures of the long struggle between these two nations. Included are detailed captions and chapter introductions.

Jowett, a military historian, collects about 200 rare photos from the Sino-Japanese War between 1937 and 1945, from the Japanese invasion and retreat of the Chinese armies and their refusal to surrender, to the involvement of the US and eventual Japanese defeat during World War II. The photos depict armies on all sides, weaponry and equipment, and the experiences of troops and civilians.

The war between China and Japan was one of the most bitter conflicts of the 20th century: a struggle between the two dominant people of Asia. Millions fought on both sides and millions of soldiers and civilians died. The many photographs are coupled with an informative and well written narrative of the conflict and provides an absorbing introduction to this often neglected theatre of war.

'A chronological chapter-by-chapter structure of concise narrative summary provides a healthy and informative balance to the mass of images.'