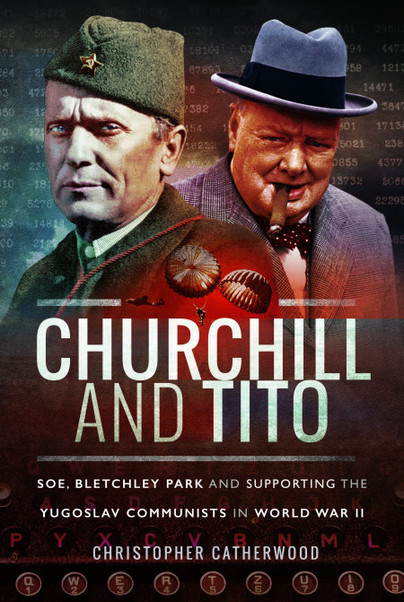 You'll be £4.99 closer to your next £10.00 credit when you purchase Churchill and Tito. What's this?
Need a currency converter? Check XE.com for live rates

One of Churchill’s most controversial decisions during the Second World War was to switch SOE support in Yugoslavia in 1943 from the Cetniks loyal to the exiled Royal Government to backing Tito and his Communist Partisan guerrillas. It led to a Communist regime in Yugoslavia which lasted until Tito’s death in 1980, and the nationalistic sentiments he had suppressed exploding into ethnic violence in the Balkan wars of the 1990s.

Until now the story has been that SOE was infiltrated by Communists in Cairo and that Fitzroy Maclean, Churchill’s personal delegate to Tito, was hoodwinked by the Communist leader, and that Churchill was duped into abandoning the royalists. However, the recently deposited papers of Sir Bill Deakin, Churchill's former assistant and an SOE operative in Yugoslavia, reveal that the decision was based upon absolutely solid evidence and in Britain's best military interests.

The official history of SOE in Yugoslavia was never written, but Deakin was the main adviser to the person deputed to write it – and Christopher Catherwood was the first person to examine the papers deposited in Washington. These papers reveal that Churchill made his decision based on evidence not just from SOE, but also from MI3, SIS and SIGINT at Bletchley Park.

Christopher Catherwood can now demonstrate that one of Churchill’s most significant and consequential decisions of the Second World War was not the terrible mistake that historians have portrayed it.

This is an excellent book, throughly researched and very readable. It carefully and objectively sets out the evidence and is an must read for anyone interested in understanding the period and the how the key decisions were made.

Churchill and Tito: SOE, Bletchley Park and Supporting the Yugoslav Communists in World War II by Christopher Catherwood (author of Churchill’s Folly: How Winston Churchill Created Modern Iraq and other works) studies the decision of Churchill to withdraw support from the Chetniks in Yugoslavia and provide support and supplies to Tito’s Communist Partisans. While the decision was controversial both at the time as well as since, Catherwood supports the choice Churchill made. The prime minister, who was motivated by the desire to pin down as many German troops in Yugoslavia as possible, based the support of Tito on ULTRA decrypts. Catherwood refutes the arguments made by the works of Peter Batty and Michael Lees on Churchill and Yugoslavia.

This book is likely to be THE definitive account of the co-operation between Britain and the Yugoslav Communists. The author has researched carefully and provides fresh information and insights. – Much recommended.

Until now the story has been that SOE was infiltrated by Communists in Cairo and that Fitzroy Maclean, Churchill’s personal delegate to Tito, was hoodwinked by the Communist leader, and that Churchill was duped into abandoning the royalists. However, the recently deposited papers of Sir Bill Deakin, Churchill's former assistant and an SOE operative in Yugoslavia, reveal that the decision was based upon absolutely solid evidence and in Britain's best military interests.
Christopher‘s book demonstrates that one of Churchill’s most significant and consequential decisions of the Second World War was not the terrible mistake that historians have portrayed it.

I really enjoy books that challenge my current understanding and thinking on aspects of the Second World War, and this one fits fully within that criteria. It was an area of the war I confess I knew little about, but this book has been very useful in understanding the complexities of waging total war, and the role of U.K. in Yugoslavia.

Chapter 1 sets the scene with a brief history of the Balkans, where religious and racial conflict was the catalyst for the outbreak of hostilities in the First World War. Yugoslavia was born out of the chaos of that war, and ceased to exist in 1941. In 1940, TITO came to power, and dominated the country until his death, after which the country fell apart in an ethnic war of fierce intensity and much barbarism.

The essence of the book is exploring why British Prime Minister, Winston CHURCHILL, and the British Chiefs of Staff, switched their support from the Serb Chetniks, to the Communist partisans led by TITO. For British readers, I would suggest it will provide a reality check, for as the book explains, about 85% of the German casualties in land warfare occurred on the Eastern Front. The Soviet Union and Germany were collaborating until 1941, and the U.K. nearly became embroiled in fighting against the Soviet Union in Finland, but when Germany attacked the Soviet Union in mid-1941, the whole context of the war changed.

This book explains the political strategic issues in clear, concise language, although some issues are repeated across different chapters. It includes the role of a small number of British officers who were sent to join the Partisans, and their eventual fates. There are twelve chapters in total, some of which detail the brutal nature of the war for ordinary people in Yugoslavia, and the desperate choices they had to make. It provokes the dilemma of armed resistance, where the other side are prepared to take extreme measures in reprisal, including murder, arson and looting. It was both fascinating, and sobering to read about these events.

There are thirteen photographs included, which on the whole add little to the value of the book. Personally, I would like to have seen more maps and diagrams to explain about the geography and topography of the areas mentioned in the text, main arterial routes, and where fighting took place. In conclusion, the purpose of the book is to explore and explain CHURCHILL’s decision to support TITO, and to this extent, it does so impeccably.

The author is one of only two men to have been awarded two separate Churchill Archives By-Fellowships, Christopher Catherwood was a Winston Churchill Memorial Trust Travelling Fellow in 2010. He has written books on the Second World War for both Oneworld and Allison & Busby, as well as three biographies of Churchill, two of which were for Constable and one for Carlton, as well as a book on the Middle East.