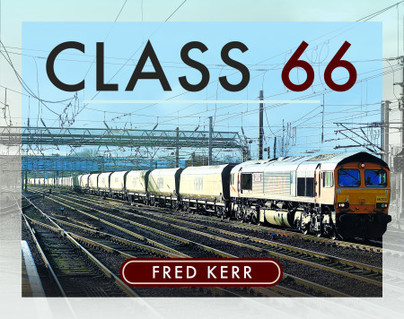 Click here for help on how to download our eBooks
Add to Basket
Add to Wishlist
You'll be £15.59 closer to your next £10.00 credit when you purchase Class 66. What's this?
Need a currency converter? Check XE.com for live rates

This book is highly recommended, both as a feast of colourful images of these modern locos, and as a benchmark for how to produce an attractive railway photographic album.

'SHED' lovers will appreciate renowned railway photographer Fred Kerr's latest album, which features over 250 shots of the UK's most ubiquitous modern freight loco. A nominal amount of text (and useful summary table) details the genesis and ownership of Class 66, but the majority of this book is devoted to images.

An interesting and well-documented book in honor of the reliable engines of the working class, belonging to class 66.

This book is a photographic reference, full of a number of good quality colour photos of the many guises this workhorse locomotive class has carried over the period since introduced by EWS following BR’s privatisation. The book starts by looking at how the design followed from the lessons learned with the Class 59 fleet and goes on to look at the reasons for EWS ordering the first 250 locomotives. It follows this with brief histories of each of the operators of the class. The book featuring photographs of each of the principal operators of the class from EWS to Freightliner to GBRf and DRS amongst others as well as featuring some of the unique one-off liveries the class has carried over the 20 plus years since they were introduced. Members who model the post-privatisation era have to have some of these ubiquitous locomotives on their layout, and this book provides a very good photographic reference. Well worth considering.