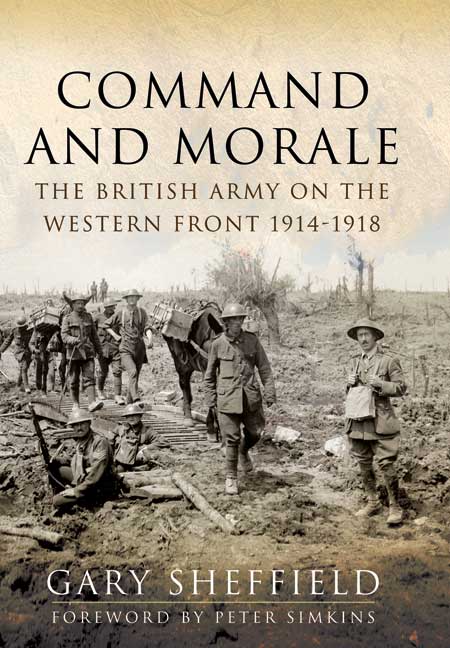 Brilliantly written book. Very easy to read - though equally hard to put down! I believe it is indispensable and compelling reading for all those with an interest not just in World War One but warfare in general and I wholeheartedly recommend it." - Dan Jarvis MP
You'll be £4.99 closer to your next £10.00 credit when you purchase Command and Morale. What's this?
Need a currency converter? Check XE.com for live rates

Gary Sheffield is one of the most versatile and stimulating of military historians at work today, and this selection of his outstanding essays on the First World War is essential reading for anyone who is keen to broaden their understanding of the subject. For three decades, in a series of perceptive books and articles, he has examined the nature of this war from many angles – from the point of view of the politicians and the high command through to the junior officers and other ranks in the front line. Command and Morale presents in a single volume a range of his shorter work, and it shows his scholarship at its best.

Among the topics he explores is the decision-making of the senior commanders, the demands of coalition warfare, the performance of Australian forces, the organization and the performance of the army in the field, the tactics involved, the exercise of command, the importance of morale, and the wider impact of the war on British society. Every topic is approached with the same academic rigour and attention to detail which are his hallmarks and which explain why his work has been so influential. The range of his writing, the insights he offers and the sometimes controversial conclusions he reaches mean this thought provoking book will be indispensable reading for all students of the First World War and of modern warfare in general.

As featured in History Extra

In this reviewer's opinion what Sheffield presents rests on sound footings. Not only does this book deserve to be on the shelves of those interested in understanding the BEF in its true context, officer training institutions would do well by including several of these essays in their curriculum. Highly recommended.

Gary Sheffield needs no introduction for anyone with a serious interest in the First World War, as he is one of the leading academic historians of the conflict. This book brings together a collection of his essays, 13 chapters spanning nearly 30 years of research and writing, brought together with some minor amendments. One new piece has been written just for the book, covering some of Sheffield’s current research into General Henry Rawlinson.

The three parts of the book cover context, command, and morale. The first chapter provides a brief summary of why Sheffield believes the war had to be fought, and why he believes the BEF became an effective fighting force by the end of the war – in essence a summary of the main points from arguably one of his most influential books, ‘Forgotten Victory’. The second chapter moves on to examine the coalition of the entente, particularly the importance of the relationships between the individual commanders. Sheffield also touches on the nature of the coalition between the Empire’s forces, and the difficulty of balancing national interest with friendship.

The new chapter on Rawlinson gives an interesting insight into Sheffield’s next potential publication. It provides a comparison of Haig and Rawlinson’s backgrounds and early careers, highlighting that they held fundamentally different views on how to conduct operations – Rawlinson an early advocate of bite and hold; Haig preferring an all-out offensive followed by mobile operations to take advantage of breakthroughs. Rawlinson was blamed for the lack of progress at Neuve Chapelle in 1915, and his career was essentially saved by Haig. Yet in subsequent operations Rawlinson often subverted Haig’s intentions. As a precursor to a future work, this is an interesting summary of how the relationship between these two men impacted on the course and conduct of the war.

Subsequent chapters include an analysis of Australian command at Pozieres, with Sheffield surmising that the Australian Corps in 1916 was not as developed as it was by 1918, and an assessment of Gough as an Army commander, where Sheffield puts forward the view that Haig’s support of Gough was not justified. Chapters examining Haig and the BEF in 1917 (focusing on Vimy Ridge and the Battle of Arras), and the British Army in 1918, round off the section on command.

The third part of the book covers morale including an overview of morale in the British Army (British morale remained intact in 1918 whilst German morale was flagging); the relationship between officers and the other ranks (paternalistic, but led to an over-reliance of men on their officers), and a battalion study of the 22nd Royal Fusiliers, based on Sheffield’s MA thesis. This research highlighted the difference in morale to a regular battalion due to the battalion’s composition, i.e predominantly middle-class. It was fairly relaxed around discipline, and proof of good morale is in its record ‘in the field’. A chapter on the role of military police highlights that their contribution to the war has been undervalued.

For well over two decades Prof. Sheffield has been producing ground-breaking work on the Great War, sorting through the evidence to brush away the many myths which have come to dominate popular, and at times academic, perceptions of the conflict to give us a more accurate picture of that traumatizing event in modern Western history.
'Command and Morale' is a very useful contribution to the literature on the BEF.

Although detailed, this is well written and easy to read and provides both an excellent overview and an insight to the reader.
First class work.

Professor Sheffield has become deservedly well known as one of the finest interpreters of the history of the British Army in the Great War and can move with equal ease between high command and the sharp end, junior officers and soldiers.
If you seek a better informed analysis of the First World War on the cusp on the centenary commemorations (and going forwards) than you will get from most newspapers and media - this is the book to start with.

In ‘Command and Morale’, Professor Sheffield has produced a brilliantly written book which examines a range of different aspects of World War One; from the organisation and performance of the army in the field, the tactics employed, the exercise of command, the importance of morale, and the wider impact of the war on British society.

Not only does the book come with his trademark academic rigour but it also is very easy to read – though equally hard to put down!

I believe it is indispensable and compelling reading for all those with an interest not just in World War One but warfare in general and I wholeheartedly recommend it.

Entertaining to a great degree.

As the essays and papers which constitute this present volume clearly demonstrate, Professor Sheffield is more than capable of producing detailed operational and command studies on the one hand and illuminating strategic and historiographical overviews on the other. His chapters here on the difficult and demanding topics of morale, discipline and officer-man relations are equally perceptive and penetrating....The formidable breadth of his reading and his prodigious capacity for research, writing and presenting international conference papers are all reflected in this book.