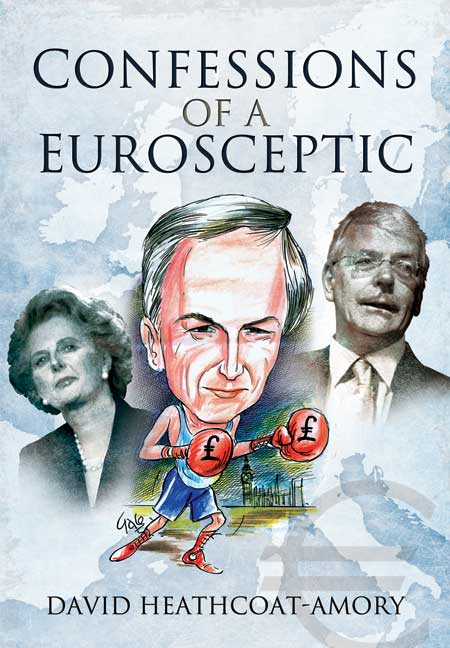 Confessions of a Eurosceptic (Kindle)

Click here for help on how to download our eBooks
Add to Basket
Add to Wishlist
You'll be £4.99 closer to your next £10.00 credit when you purchase Confessions of a Eurosceptic. What's this?
Need a currency converter? Check XE.com for live rates

Few are better placed to write on Britain's relations with the European Union than David Heathcoat-Amory. In describing his own journey from initial enthusiam for a Common Market to rejection of the EU, he gives an insider's view of the delusions and deceits which surround the European question.

As a Member of Parliament, Minister of State and Privy Councillor, he witnessed two prime Ministers wresting with the 'elephant in the room'. He describes Margaret Thatcher's struggles against EU control and the clashes with cabinet colleagues which split the Conservative Party and brought her down. Under John Major, David Heathcoat- Amory played a pivotal role in the parliamentary battles over the Maastricht Treaty. As Minister of State for Europe he was intimately involved in keeping Britain out of the euro, thereby avoiding the worst of the current devasting financial crisis. He resigned as Paymaster General in 1996 on a matter of principle.

In Opposition, he was sent by the House of Commons to negotiate a Constitution for Europe, which he opposed with a small group of dissidents from other EU countries. As they predicted, the European Constitution was decisively rejected in referendums in France and Holland but was forced through anyway, with Blair's government refusing a referendum at home.

The book includes a blueprint for a radically new relationship between Britain and the EU. The Author argues that, with leadership and ambition, this is now attainable, with the final decision resting with the people in a referendum.

As seen in the Catholic Herald

Confessions of a Eurosceptic charts the journey of an honourable man “from acceptance of the EU to rejection of it”; it provides an insider's view of the ructions in the Conservative Party and the workings of the Convention on the Future of Europe, which produced the ill-fated European constitution of 2004.

Confessions of a Eurosceptic is an elegant memoir that outlines his euroscepticism but also touched with personal and family tragedy.

He takes no refuge in self-satisfaction, neither does he regret resigning on a point of principle. There are, as he learned subsequently, far more important things in life than politics.

In his new memoir, Confessions of a Eurosceptic, David Heathcoat-Amory describes frustrating conversations with his then boss of the Treasury, Kenneth Clarke. Clarke would never engage with the arguments about what the single currency entailed. He would simply warn that if the project did not press ahead, 'right-wingers' would win.

Crisply argued and concise, Confessions of a Eurosceptic sets the reasons for his resignation in their political context.

This book is unlike most books by politicians. With unusual clarity this book tells the story of Britain's European involvement since the mid-Eighties.