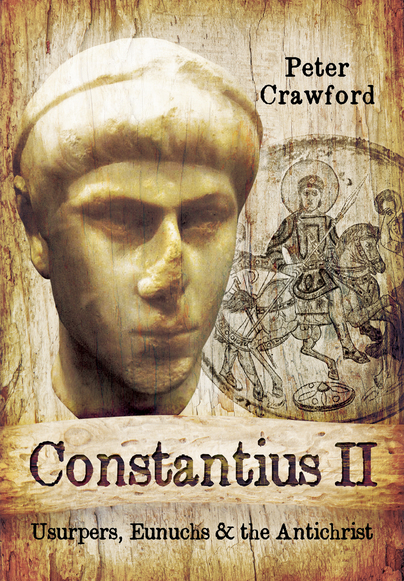 Usurpers, Eunuchs and the Antichrist

Add to Basket
Add to Wishlist
You'll be £25.00 closer to your next £10.00 credit when you purchase Constantius II. What's this?
+£4.50 UK Delivery or free UK delivery if order is over £35
(click here for international delivery rates)

The reign of Constantius II has been overshadowed by that of his titanic father, Constantine the Great, and his cousin and successor, the pagan Julian. However, as Peter Crawford shows, Constantius deserves to be remembered as a very capable ruler in dangerous, tumultuous times.
When Constantine I died in in 337, the twenty-year-old Constantius and his two brothers, Constans and Constantine II, all recieved the title of Augustus to reign as equal co-emperors. In 340, however, Constantine II was killed in a fraternal civil war with Constans. The two remaining brothers shared the Empire for the next ten years, with Constantius ruling Egypt and the Asian provinces, constantly threatened by the Sassanid Persian Empire. However, Constans in turn was killed by the usurper Magentius in 350. Constantius refused to accept this fait accompli, made war on Magentius and defeated him at the battles of Mursa Major and Mons Seleucus, leading him to commit suicide.
Constantius, was now sole ruler of the Empire but it was an empire beset by external enemies. Constantius campaigned successfully against the Germanic Alamanni along the Rhine and the Quadi and Sarmatians across the Danube, as well as against the Persians in the East, though with more mixed results. In 360 he elevated his cousin Julian to the rank of Caesar (effectively deputy emperor) and left him to govern the West, while he concentrated on the Persian threat. Julian defeated the Alamanni in battle but was then proclaimed Augustus by his troops. Constantius was marching back to meet this threat to his rear when he fell ill and died. Having done so much to defend and preserve the empire, his dying act was to attempt to avert further civil war by declaring Julian his rightful heir.

Crawford gives us several good accounts of various campaigns, including excellent analyses of a number of battles and sieges; notably those of Strasbourg, Amida, and Bezobde [...] This is a good read for anyone interested in the late Empire.

Constantine 1. Yes! He was one of the great Roman emperors, one of the “big 5”. And Julian “the Apostate”, well with a label like that, he has to have been the target of a few Wikipedia searches. But who knows about Constantius II, sandwiched between Constantine and Julian?

According to this book, we should know at least as much about Constantius II. He was Augustus of the entire Roman empire for 24 years, and Caesar of the Western half for 13 years before that. In common with Constantine his father, and most other rulers of the age, he was ruthless and bloody when it suited him, including killing members of his own family.

However, at a time when the Roman Empire was beset by multiple powerful enemies, he defended most expertly, the Rhine and the Danube frontiers against the “barbarians” and the Eastern borders against the Persians. He successfully fought several civil wars. His successes as a general, often with limited resources, caused his enemies to fear him. Yet, because he basically fought defensively and conquered no new territories for Rome, he was barely remembered.

This book is authoritatively written, very readable, with 8 very good maps, diagrams of major battles, lists of emperors and usurpers, and a very detailed section of footnotes and sources. The introduction and summary of the century leading up to Constantius II sets the scene thoroughly.

Fills a great emptiness in biographies
of characters of the Late Roman Empire.