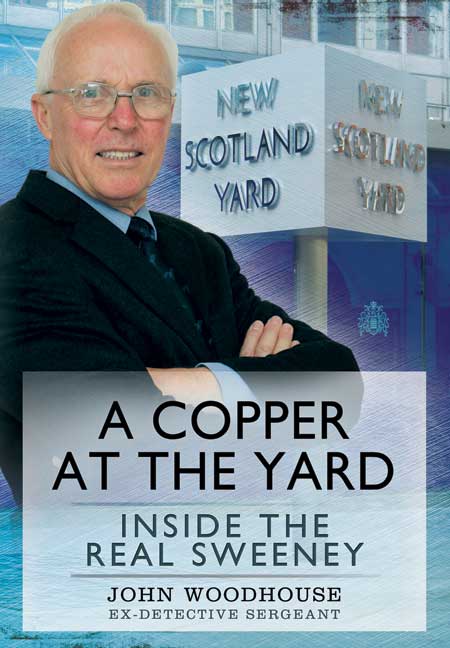 Copper at the Yard (Kindle)

Inside the Real Sweeney

Click here for help on how to download our eBooks
Add to Basket
Add to Wishlist
You'll be £4.99 closer to your next £10.00 credit when you purchase Copper at the Yard. What's this?
Need a currency converter? Check XE.com for live rates

Being a copper at the yard was definitely an exciting time for the author, John Woodhouse, but it did take it's toll on social and family life. From east end detective, to the Bomb Squad in London's fight back during the IRA bombings of the 1970s, to the Flying Squad in the fight against organised crime. But amongst all this there was a lighter side, from Morris Dancing, to a cross dressing débutante at Ascot's ladies day, to undercover cop is all in a days work, until out of the blue he was told he had terminal cancer and to go home and die.

This book is an insight into the life of an ordinary guy who has led an extraordinary life, who has opened deaths door and closed it again, but still had time to smile at life as he endured the battle with cancer. Fighting his way back to return to duty at the yard with one lung and continuing his career, this is the story of guts and determination. To take on the Chinese triads in their own back yard and and come out the other side is astonishing in itself, but along with all the ups and downs in his life this ordinary guy's approach to life is one of optimism and fun. This book will certainly make you laugh at times and cry at others, you can live his life along side him on every page.

In the late-60s, while working as a bricklayer foreman, Woodhouse knew there was something missing from his life. The one day he saw a policeman jump into a speeding car, off to a job, and realised he too needed the danger and excitement of the force. From the moment he began training, his sense of humour saw him occasionally skating on thin ice. But after joining CID he developed into a good detective, even in his early career in the Flying Squad was more Clouseau than Carter. Diagnosed with lung cancer, he had diseased lung removed and after a fill-recovery, he returned to the force in an intelligence role, investigating Triads and the like, and now nicknamed ‘One Lung Woody’. In his memoirs, he paints a picture of a changing organization, not always for the better, and allows his personality to shine through, admitting how he’s now ‘a Victor Meldrew-type character, although once considered himself to be more of a Michael Caine figure.’

The grandfather of three’s book took eight years to write, he previously told the Enquirer: “it is all a bit tongue-in-cheek. There is no glory just the hiccups and things that happened to me. It makes you laugh, it grabs the reader by the throat and ultimately I think is quite uplifting.”
From East End detective to Scotland Yard’s Bomb Squad from the elite Flying Squad to conquering cancer, Mr Woodhouse’s book is full of amusing anecdotes and has received attention from further a field, with Talk Radio Europe set to interview him later this month.

I read the book and felt it was brilliant at presenting the differences between the old ways of policing and present day policing with all the guidelines that police have to abide by now, and how results were nearly always achieved as they built up good relationships with the crooks.

The impression was given of how there was always total respect for the police from all walks of life - especially the villains.

The book also exposed how many of their enquiries and “little chats” were carried out in pubs during drinking and smoking sessions.

This book was certainly one that once you picked it up and started reading you had to finish it, which I did very quickly.

If you are only going to read one police-related autobiography, make it this one. I have read a good many and I think it is probably the best. It is constructed really well, and does not run chronologically, but it gives really good insights into policing of (East)London during a very interesting period, particularly the 1970s and 1980s, an era which policing history will, I suspect, find more and more fascinating as the years go by. It has some great moments of humour and human drama, not least the author's battle with illness. The early pages include the author dropping his gun on a Flying Squad operation, and he is modest about the parts he played in combatting some serious criminal activity, but here is a man of considerable courage and character with a good story to tell.

Alan Moss, History by the Yard

Take the reminiscences of a 1960s detective from London’s East-end, add a dash of Flying Squad, give it a shake, tell the story with lightness and humour and a very presentable book will emerge – the more so, because the policing that the public received then, shows no comparison with what they receive today.

But – and it’s a big ‘but’ – where this book differs is because twelve years into what looked like a very promising career, the author was diagnosed with terminal cancer and to all intents and purposes, was told to go home and quietly die. The story of how the skill of the surgeons, the love and support of his family and colleagues and above all, the sheer determination and courage of John Woodhouse turned this hopeless scenario right around makes compelling reading.

The proof of the pudding is displayed, firstly, by having beaten cancer, Woodhouse returned to work and made a massive contribution to the world of criminal intelligence at Scotland Yard; secondly, he completed thirty-one years’ service with the police and lastly, thirty-five years after the initial gloomy diagnosis was able to write this compelling, page-turning memoir.

John Woodhouse is 68 years old, retired, living near Brentwood in Essex with his wife Sue who together brought up three sons, all now married. He completed 31 years as a Police officer over 20 years of which  at New Scotland Yard, at the rank of Detective Sgt. His certificate of completion of service is signed by the then Commissioner and specifies conduct as 'Exemplary', he is a Freeman of the City of London, and the rest is in the book.