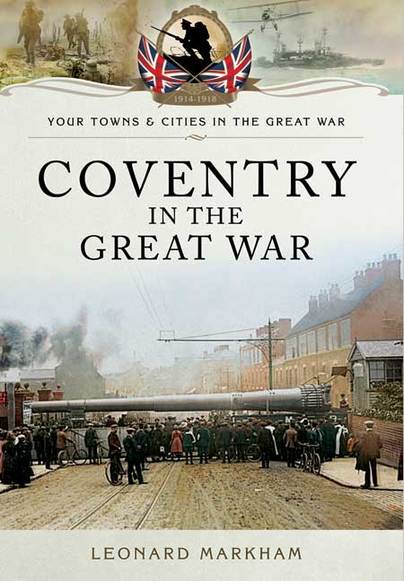 Coventry in the Great War (Kindle)

Click here for help on how to download our eBooks
Add to Basket
Add to Wishlist
You'll be £4.99 closer to your next £10.00 credit when you purchase Coventry in the Great War. What's this?
Need a currency converter? Check XE.com for live rates

During World War One, the city of Coventry was a powerhouse that kept the barrels loaded and the engines of war purring. An industrial giant, Coventry produced munitions by the million and built tanks, aircraft and fighting vehicles of every description. It never slept.

Coventry in the Great War commemorates the centenary of the outbreak of the conflict in 1914, telling the dour and ungilded story of the people who laboured and endured for over four grueling years. This eclectic narrative of the lives of city residents and incomers alike is juxtaposed with often-bloody accounts from the many theatres of war to give a representative and nuanced picture of one of the darkest chapters in world history.

The 100th anniversary of the firing of the first fateful bullet is not a time for celebration but rather an opportunity for quiet reflection and studied lesson learning. The 2,599 men of Coventry who died in the cause of freedom deserve no less.

During the First World War, the advanced state of the machine tooling industry in the city meant that pre-war production could quickly be turned to war production purposes, with the Coventry Ordnance Works assuming the role of one of the leading production centres in the UK, manufacturing a quarter of all British aircraft produced during the war.

But the experience of war also impacted on the inhabitants of the area, from the initial enthusiasm for sorting out the German Kaiser in time for Christmas 1914, to the gradual realization of the enormity of human sacrifice the families of Coventry were committed to as the war stretched out over the next four years.


I have read a few books in this series now and when I saw that there was a book on Coventry I treated myself and downloaded a copy of the book over the Christmas break. I live in Nuneaton and work in Coventry so it was great to be able to get a book that I could really relate too on a personal level.

I have been reading more and more on this period of history and I have to say that I did think that this book was great, it is a tad quirky (in a very good way) in relation to how the main stories that appeared in the news at the time were told and it for me makes it stand out from the rest of the series.

It was full of punchy facts, personal stories and newspaper excerpts and it is packed with social history as well too and it is a great introduction to what was going on in Coventry and the surrounding area in the build-up too, during and immediate aftermath of the Great War.

It is 5 stars from me for this one, I really enjoyed the layout and the way that the author decided to discuss the subject.

The author describes his book as “the necessarily abridged but unadorned story of Coventry during the Great War of 1914-18”. That's exactly what is achieved through 118 pages.

An excellent book for anyone interested specifically in the role of Coventry and surrounding area during the Great War. One reservation: there are some inaccuracies in the index - page numbers listed do not always contain information about the word indexed.
4.5 out of 5.

A fascinating account of how the war affected Coventry's people, both on the Home Front and on active service.