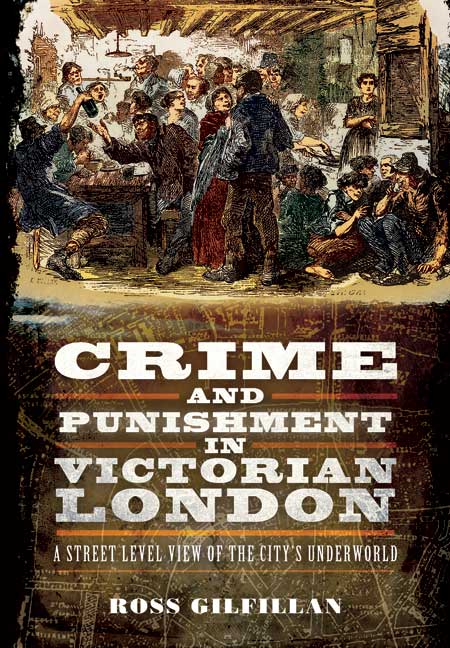 A Street-level view of the city's underworld

Add to Basket
Add to Wishlist
You'll be £12.99 closer to your next £10.00 credit when you purchase Crime and Punishment in Victorian London. What's this?
+£4.50 UK Delivery or free UK delivery if order is over £35
(click here for international delivery rates)

'Crime loomed large in the minds of Victorian Londoners. All over the city, watches, purses and handkerchiefs disappear from pockets, goods migrate from warehouses, off docks and out of shop windows. Burglaries are rife, shoplifting is carried on in West End stores and people fall victim to all kinds of ingenious swindles.

'Pornographers proliferate and an estimated 80,000 prostitutes operate on London's streets. The vulnerable are robbed in dark alleys or garroted, a new kind of mugging in which the victim is half-strangled from behind while being stripped of his possessions...'

Discover Victorian London's grimy rookeries, home to thousands of the city's poorest and most desperate residents. Explore the crime-ridden slums, flash houses and gin palaces from a unique street-level view and meet the people who inhabited them.

Ross Gilfillan uncovers London's lost criminal past in this fascinating account of nineteenth century low-life. Come face to face with pickpockets snatching pocket watches; pornographers peddling guides to lewd London; swindlers deluding the unwary and murderers whose deeds made the headlines and shocked their readers; right through to the consequences of their crimes – prison, transportation, or the gallows!

As featured in the East Anglian Daily Times and Iceni Magazine.

This book's author makes liberal use of the work of leading Victorian social commentators and researchers: Dickens, Mayhew and John Binny, quoting them in quite large chunks and pulling it all together in an appealing and easily readable fashion.

We can tend to draw our perceptions of Victorian life from Charles Dickens' novels; this book gives a readable perspective that supplements our knowledge, in a happy style that is neither too academic nor too fiction-based.

A dark and intriguing book that brilliantly captures the dangers of living (and surviving) in nineteenth-century Victorian London.

Ross Gilfillan's examination of crime and punishment in 19th-century London provides an absorbing insight into the darker side of a period that still fascinates today. This is no 'schlock-horror' exploration of past crimes but instead shines fresh light on the lives of our poorer ancestors and their misdemeanours, often brought about by necessity rather than malice. Told via the keen pen of an author who knows a good story, it's history with a heart.

Takes readers deep into the city's squalid and dangerous underworld where serial killers stalk the streets and bands of thieves, cut-throats and conmen abound.

Ross Gilfillan is the author of The Snake Oil Dickens Man and The Edge of the Crowd and it was during research of these period-set novels that he developed an interest in the underside of Victorian society. A magazine journalist of long standing, he contributed a literary books column to the Daily Mail for twelve years and has written for a wide range of periodicals and newspapers.