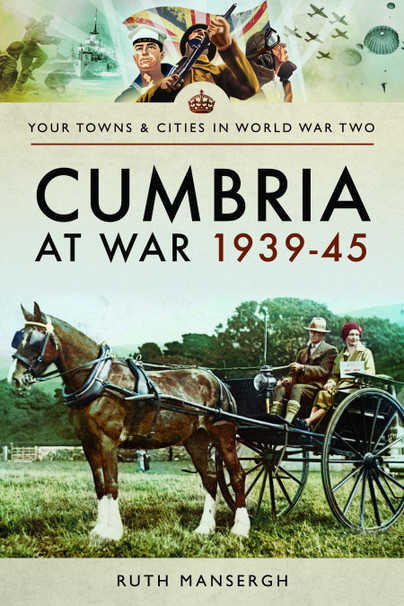 Click here for help on how to download our eBooks
Add to Basket
Add to Wishlist
You'll be £4.99 closer to your next £10.00 credit when you purchase Cumbria at War 1939–45. What's this?
Need a currency converter? Check XE.com for live rates

The outbreak of war marked a new era for the people of Cumbria. Many young men and women enlisted in the Forces, while older people joined the Home Guard or became Air Raid Precaution Wardens. Children from cities were sent to Kendal to escape the threat of bombing raids, members of the Women’s Land Army began to arrive on at the local farms, and Silloth airfield near Carlisle trained thousands of pilots from allied countries.

The first sign of German interest in the important shipbuilding town of Barrow-in- Furness was in May 1936, when a rigid airship and passenger aircraft flew very low and slowly over the Furness rooftops. Vickers shipyard became a target for enemy bombing and eventually more than 10,000 houses were damaged or destroyed by the Luftwaffe during the Barrow Blitz that took place during April and May 1941.

Extensively researched, the book takes a detailed look at the ships built in Barrow, memorials in the city of Carlisle and towns and villages across Cumbria, and remembers the brave dead of Second World War.

Overall, this is a poignant testimony to the momentous efforts, bravery, self-sacrifice and determination of the people of Cumbria during the Second World War, who sought to find normality in a reality so far removed from anything they had ever known.

Overall this is an useful read for anyone interested in the history of what is now Cumbria, providing plenty of well research information.

"I commend this book to anyone interested in the Second World War and in Cumbria, delightfully written and well researched."

Great to see 'Cumbria at War' by Ruth Mansergh on the Lakeland Book of the Year longlist. That book was very useful while I was writing 'AfterTheWar'.

Reviewed alongside Newtownards in the Great War

In this fascinatingly good read, Ruth has captured the spirit and uncertainty of all Cumbrians in those stressful years.

Article: 'Harecroft Hall memories in print' as featured by

Extensively researched, like all Pen and Sword titles, this is a story that should never be forgotten.

Article: 'Teacher publishes her first book on Harecroft Hall' as featured by

This entire series of Your Town and Cities In World War Two has been to a one exceptional both in its individual stories and throughout one volume to the next. The coverage of each area has been full of detail and factual information. This edition by Ruth Mansergh again is packed full of new scholarship and fascinating detail and Cumbria might be the blue ribbon book of the series with great photos and well written text. At 279 pages it has both length and a solid flow to the material which will keep a reader engaged from start to finish.

It certainly serves to bring to life the past and make an exciting study of the places and people who were a part of Cumbria during the Second World War. From the 1936 Olympics to the Zeppelin flyovers the pre-war section is brilliant. I thoroughly enjoyed all the attention and detail with the various locales which are stunning and impressive. This text might have some of the best detail of the series and the inclusion of vast number of personalities is sure to grab one’s attention with their individual stories and accounts of war time service and experiences.

I thought the last series addition of Kent had set a new standard for this line; however Cumbria with its great coverage of local, land air and sea facets will likely be on the finest books in the series. The greater length was superb, the photos very well done and served to encompass numerous aspects which set this book apart. I thoroughly enjoyed the journey back into the period and thought Ruth Mansergh does an exceptionally great job in providing outstanding flow and attention to detail. I recommend this book as a great addition to any Second World War library and for the general historical enthusiast as well.

Extremely well researched and detailed with many photographs.

I have found it most interesting. It covers an array of information of wartime Cumbria, and is a fine testament to the those who served in their various capacities during the time of the Second World War.

This new book is a worthy addition to a well-established series. The story of the towns, cities and regions of Britain during WWII demonstrates the total war nature of this costly conflict. - Much Recommended

Article: 'How war changed Cumbria for good' as featured by

Ruth's study is a fascinating read.