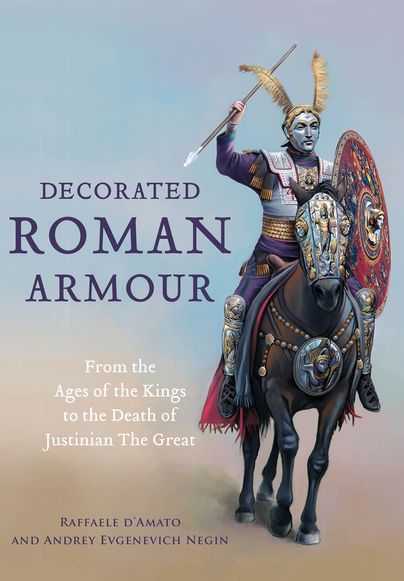 Click here for help on how to download our eBooks
Add to Basket
Add to Wishlist
You'll be £4.99 closer to your next £10.00 credit when you purchase Decorated Roman Armour. What's this?
Need a currency converter? Check XE.com for live rates

From the time of the Bronze Age, warriors of all tribes and nations sought to emblazon their arms and armour with items and images to impress upon the enemy the wealth and power of the wearer. Magnificently decorated shields were as much a defensive necessity as a symbol of social status. Equally, decorative symbols on shields and armour defined the collective ideals and the self-conceived importance of the village or city-state its warriors represented.

Such items were therefore of great significance to the wearers, and the authors of this detailed and extensively researched book, have brought together years of research and the latest archaeological discoveries, to produce a work of undeniable importance.

Decorated Roman Armour is richly illustrated throughout, and as well as battlefield armour, details the tournament and parade armour from Rome's earliest days.

This is a great book just to have out for a conversation piece for people that just want to browse the pictures, but the narrative is just as enticing. Loved this!

Dr Andrey Negin is candidate of historical sciences (Russian PhD), member of the department of history of the Ancient World and Classical Languages of Nizhny Novgorod State University named after N.I. Lobachevsky (Russian Federation). He has carried out fieldwork on ancient Roman armour and has published books and numerous articles on Roman military equipment.