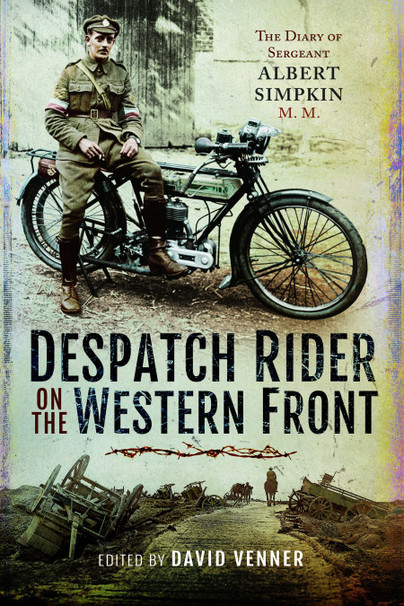 Click here for help on how to download our eBooks
Add to Basket
Add to Wishlist
You'll be £4.99 closer to your next £10.00 credit when you purchase Despatch Rider on the Western Front 1915–18. What's this?
Need a currency converter? Check XE.com for live rates

This book is a skilfully abridged version of the diary of a First World War motorcycle despatch rider, Sergeant Albert Simpkin, who was attached to the HQ 37th Division. The diary entries, and some longer descriptions of the main actions of the Division, provide a fascinating record of the life of a despatch rider on the Western Front; one day dodging shell holes and ammunition limbers to take his despatches to the front, the next observing the quaint but often courageous lives of the local populace. Throughout the diary are colourful and amusing anecdotes about his fellow soldiers, and critical comments on the strategies and tactics employed by the officers.

This book contains first-hand accounts of the major battles including the Battle of the Somme, mixing the horror and brutality of war with a soldier's black humour as well as some stinging critical comments about the strategies and tactics employed by the officers.

Reading David Venner' s outstanding edit of his great uncle's (who was a motorcycle despatch rider) world war I diary. A nicely written account, refreshingly free of the pro or anti war baggage that tends to denature most attempts to story war. Really recommend it.

There is a growing clamour for personal accounts of First World War experiences, and this wonderful book fulfils that brief in spades. Venner has done a brilliant job in editing Albert's diaries, and the end result is a fascinating account of his experiences on the Western Front - a fantastic read and a real and essential contribution to WW1 literature.

You will never read a more factual and revealing book, written by someone who was in the thick of it; and I cannot recommend it highly enough.

You'll never feel sorry for yourself again. Or moan about rain. The 'war' bits of this diary are horrific, not least the greater danger of being mown down by your own trucks. There is comedy though and a scarcely masked disdain for the officer class.

Like many soldiers in the Great War, Albert Simpkin kept a diary, although against army regulations. This book is an edited version, introduced and abridged by his great nephew. It is a remarkable account of his lengthy war service in France and Belgium from July 1915 to early 1919.

As a despatch rider he had one of the most dangerous jobs, travelling in all sorts of weather and over all sorts of terrain, day and night, to and from the trenches. He and his fellow dispatch riders frequently had to dodge artillery fire in the difficult search for the units to which they were delivering orders. Despite all dangers, he came through without a scratch. It seems that his pre-war experience of motorcycles (he worked as an engineer for Crossley Brothers in Manchester) and maturity served him in good stead. The army soon recognised these qualities by advancing him to the rank of sergeant.

Simpkin writes vividly of the horrors he saw on the Western Front. At the same time there is an intriguing emphasis on what he saw of the air war - dogfights over the trenches and German aerial bombing of Allied positions. There seems to have been a strong interest taken by the despatch riders in what they saw in the skies above them. A number of them applied to be transferred to the Royal Flying Corps. Simpkin also describes vividly the extreme dangers of artillery bombardment. The chateaux in which General Staff officers were often quartered, with their dispatch riders in attendance, were as vulnerable to these attacks as those in more forward positions.

Unlike many former soldiers, Simpkin made the journey back to the battlefields in the 1930s, which provided a further impetus for editing and reordering the notes he had made during the war. It is fortunate as well as a tribute to his outstanding war service that his well-written account of what he experienced has now seen the light of day

It is worth seeking out and reading and if you are a fan of Great War motorbikes and vehicles this is a must.