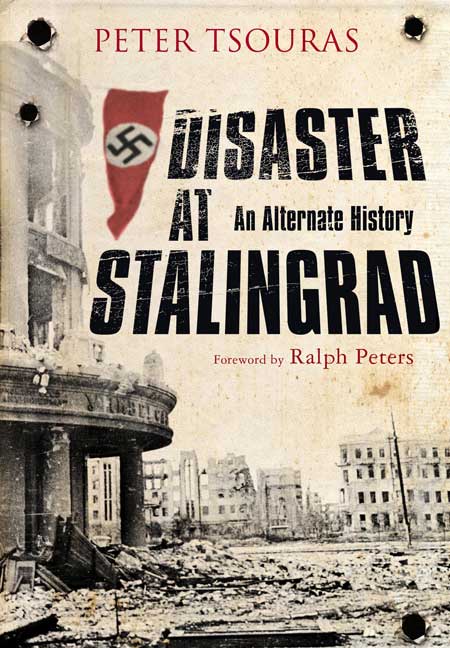 Click here for help on how to download our eBooks
Add to Basket
Add to Wishlist
You'll be £4.99 closer to your next £10.00 credit when you purchase Disaster at Stalingrad. What's this?
Need a currency converter? Check XE.com for live rates

It is early September 1942 and the German commander of the Sixth Army, General Paulus, assisted by the Fourth Panzer Army, is poised to advance on the Russian city of Stalingrad. His primary mission was to take the city, crushing this crucial centre of communication and manufacturing, and to secure the valuable oil fields in the Caucasus.

What happens next is well known to any student of modern history: a brutal war of attrition, characterised by fierce hand-to-hand combat, that lasted for nearly two years, and the eventual victory by a resolute Soviet Red Army. A ravaged German Army was pushed into full retreat. This was the first defeat of Hitler's territorial ambitions in Europe and a critical turning point of WWII.

But the outcome could have been very different, as Peter Tsouras demonstrates in this thought-provoking and highly readable alternate history of the fateful battle. By introducing minor 'but realistic' adjustments, he presents a scenario in which the course of the battle runs quite differently, which in turn sets in motion new and unexpected possibilities for the outcome of the entire war. Cleverly conceived and expertly executed, this is alternate history at its best.

This work overall is a remarkable read. I would heartily recommend it to anyone who wants to explore what kind of alternative results could have risen from the Battle of Stalingrad.

In this thought-provoking book, this former soldier and military intelligence expert shows just how it might have gone.

He is a fine writer and this book is hard to put down… and it has some ending!

Peter Tsouras's account of the defeat of the German army at the Battle of Stalingrad is at once harrowing and moving, staggering and monumental. Peter suggests that the outcome could have been different, but his examination of what actually happened is brilliantly realised and this book will go down as one of the major accounts of one of the great turning points in the defeat of Hitler and his forces.

Although this is a alternative to the Stalingrad story, it is presented in a way that you can see what would have happened if things went slightly differently. At times it can be a bit wordy, but all in all an interesting read that sheds a different light on what might have happened during this most bloody period of the Second World War.

This book makes a very good job of arguing the case with solid evidence, some fresh insights, and presents it in an absorbing and enjoyable text with good illustration, including a photo plate section. – Very Highly Recommended

The key question therefore is does the book work as a work of historical fiction, and for me the answer is a resounding yes. Tsouras is a very skilful author - the book is entertaining and readable, his changes are certainly credible enough to work in fiction, most of the historical figures behave in a way that is close enough to reality to not be too jarring, and the ending is very entertaining (if entirely implausible). This is a very readable novel that certainly drew me in.

If you like the alternative history genre you will not want to miss this one.  If you are an Eastern Front enthusiast I’d say give it a go you might surprise yourself!

This is a remarkable example of 'alternate history' at its best . . . Peter Tsouras has conjured up a German victory rather than the disastrous defeat it was. But how could that have happened? That is the essence of the extensive and very plausible narrative the author has developed – a narrative that grips the reader all the more as he/she turns each page to seek the answer to what could have gone wrong for the Russians . . . Enjoy the fast-paced exposition of detail provided, and be prepared for a surprising ending.

Counter factual (what if?) histories are of course fiction but when well crafted they can provoke some deep thought on how events could have turned out differently. The also call into the spotlight how small seemingly unconnected events can create real history whilst missing the fork in the road that could have led to different outcomes. The author is among the best practitioners of the ‘what if’ history and has succeed in producing a hugely readable exposition of how the German assault on Stalingrad could have turned out differently, by repositioning the strategic objectives and plausibly adjusting a few facts that take us to a different outcome.
The real fun is spotting the counterfactual ‘lies’; some are easy but many are less so and therefore the reader is challenged to compare the factual to the counterfactual and eventually better understand the reality. A most enjoyable ‘page-turner’ book that really cannot be put down; leave time for it.
Michael McCarthy. Battlefield Guide

I read this 240 page book in a few days, it was hard to put it down. Often alternative history requires too many unlikely events and coincidences to make it happen. The dramatic and tragic Stalingrad story is however full of possibilities for this kind of treatment that require only minimal and believable changes, as the Germans came so very close to success despite all their problems. Peter Tsouras doesnâ€™t just deal with Stalingrad. He also asks several other questions, like what would have happened if the ENIGMA decoding had been discovered by the Germans? What would have happened to convoy PQ-17 if all the German ships sailed as planned (one was stopped by hitting rocks just as it left port)?. Thus this story includes a major naval battle. The story is really well told, and often it is very hard to tell fact from fiction, as real events are moved around. Anybody who knows the real story will constantly be wondering what is going to happen next â€“ as each German victory has its price, and events often follow their real course. The Germans do not get an easy ride and often do stupid things or otherwise get into trouble, leaving you wondering how on earth they are going to save themselves. My only criticisms are that too many personnel changes have to be made from real life, and more maps are needed, especially of the final Stalingrad battles, to make the final part of the story more credible. Wargamers and â€œHearts of Ironâ€ players will love this book, you can almost see the author re-arranging the counters on the map.