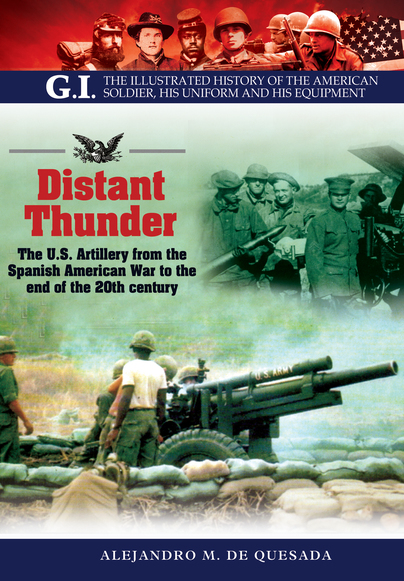 The U.S. Artillery from the Spanish American War to the end of the 20th century

Click here for help on how to download our eBooks
Add to Basket
Add to Wishlist
You'll be £4.99 closer to your next £10.00 credit when you purchase Distant Thunder. What's this?
Need a currency converter? Check XE.com for live rates

The twentieth century was a time of near total transformation of artillery. The U.S. Army was at the forefront of these developments. American troops fighting the Spanish in Cuba during the Spanish-American War were equipped with the 1885-model field gun; nearly a century later American troops fielded an array of accurate, advanced and precise weapons systems during the Gulf War.

This unique pictorial history examines the weapons – from field guns to MLRS and TACMs – and the equipment utilized by American troops along with the uniforms and insignia of U.S. artillerymen. It looks at field artillery, coastal artillery, anti-aircraft and a diverse array of modern missile types and systems.

This is a useful guide to a crucial part of America's twentieth-century armed forces and offers valuable insights into the evolving world of modern artillery.

This popular pictorial history series was originally published by Greenhill Books. The strength of this series lies in the selections of rare and interesting images. Text is limited, concise and mainly restricted to captions and extended captions. – Highly Recommended.

The reader has a compact and authoritative history of the US artillery in the Modern Age.

Artillery is the topic for this new one in the series of books that make up 'G.I., An Illustrated History of the American Soldier, his Uniform and his Equipment'. It follows the standard format for the series, with an 82-page soft cover book, where the first four pages give the background text to the story, followed by 8 pages of colour images and the remainder being black and white archive photos. Starting from the end of the Spanish American war, the development of artillery in the US armed forces is nicely covered.