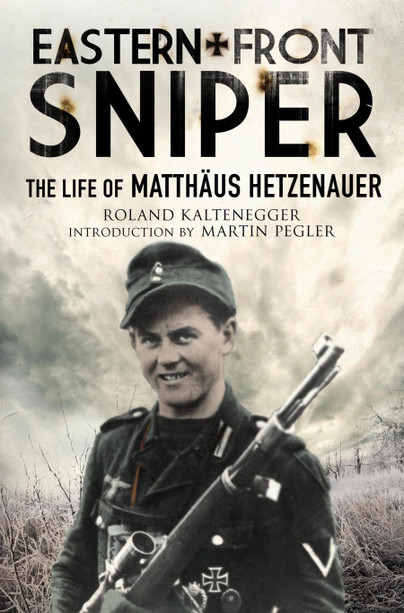 The Life of Matthäus Hetzenauer

Click here for help on how to download our eBooks
Add to Basket
Add to Wishlist
You'll be £4.99 closer to your next £10.00 credit when you purchase Eastern Front Sniper. What's this?
Need a currency converter? Check XE.com for live rates

Eastern Front Sniper is a long overdue and comprehensive biography of one of World War II’s most accomplished snipers.

Mathäus Hetzenauer, the son of a Tyrolean peasant family, was born in December 1924. He was drafted into the Mountain Reserve Battalian 140 at the age of 18 but discharged five month’s later.

He received a new draft notice in January 1943 for a post in the Styrian Truppenübungsplatz Seetal Alps where he met some of the best German snipers and learned his art.

Hetzenauer went on to fight in Romania, Eastern Hungary and in Slovakia. As recognition for his more than 300 confirmed kills he was awarded on the Knight's Cross of the Iron Cross on April 17, 1945.

After nearly five years of Soviet captivity Mathäus Hetzenauer returned to Austria on January 10, 1950. He lived in the Tyrol's Brixen Valley until his death on 3 October of 2004.

An in-depth look at a forgotten German marksman.

This well-written and nicely illustrated book is a natural counterpart to “Notes of a Russian Sniper”, FIRE Project review file B2556, full review tinyurl.com/gn7u7hj. – Since James the Bastard was shot by a sniper firing a hack butt from concealment, the sniper been a powerful resource with which to attack an enemy – Highly Recommended.

Today, we often see snipers in movies such as Enemy at the Gates (2001) and American Sniper (2014), which all attempt to capture different aspects of the sniper’s life. If one enjoyed those films, then he will not be disappointed to read this book as it contains actual tactics and techniques used by real German snipers during WWII. It is fascinating when considering that many of these techniques are still being used today. I heartily recommend this book to anyone who wishes to learn more about the German scharfschütze.

The author explains Hetzenauer's early life and wartime service and his capture by the Russians in 1945 and then his post-war life. Part of the book compromises of training techniques and illustrations from the manuals and is fascinating stuff. If you are interested in the history of sniping, this is a book for you.

Accounts involving the service of Second World War sharpshooters or Snipers are few and far between as the specialty carried and still has a weight of heavy judgement upon these individuals as hunters of men or worse killers. There cannot be the simple analogy that pilots use in merely shooting down planes rather than opposing pilots. That being said I was very keen to explore this text and develop a better understanding of Hetzenauer and his service. I was not disappointed, and flew through the text and the volume of information of both training and field service. Kaltenegger does a very fine job authoring this material and handling the challenges a study like this presents.

The technical side of training and combat service is presented both in an organized and riveting fashion which is told through Matthaus’s journey into Wehrmacht service and what factors of his youth and environment contributed to his future service path. This book fills some major gaps in actual training method and snippets of field craft, marksmanship and technique that are historically important. Roland weaves the larger background of the war, especially as it faces grave challenges of the 1944 and 45 periods and how these teams were often a final fail safe for those who had to pull back or assist in transferring wounded comrades. Additionally we, the readers are also given some insights to the Soviet tactics themselves and how brutal the combat was for both the Axis and Allied infantryman over those final two years.

I thoroughly enjoyed this book and would recommend it, the material has a very good flow to it. Hetzenauer’s story itself is quite compelling capturing his service and Soviet captivity as well as his later years in the Austrian Mountains. Reading a Soviet sniper memoir simultaneously offered up a few very interesting angles however this material stands up well on its own merits. Covering a few other of Matthaus’s divisional associates who also had high scoring marks. Students of both the wider war experience and those whose interest revolves around service training, field experiences and the front line soldier will all enjoy this book.

Roland Kaltenegger is the author of more than ten books on World War II including The Mountain Troops Of the Waffen-SS 1941-1945 and Weapons and Equipment Of the German Mountain Troops In World War II Martin Pegler is the Britain’s foremost authority on military firearms and specialises in the subject of military sniping. His specialist professional hands-on knowledge of the development of military firearms, ammunition and ballistics, gained during 20 years as Senior Curator of Weapons at the Royal Armouries Museum, is unparalleled.