Powerful Pawns of the Crown

An article written by the author for Dan Snow's History Hit: 'How the Clare Sisters Became Pawns of the Medieval Crown.'

You'll be £17.50 closer to your next £10.00 credit when you purchase Edward II's Nieces: The Clare Sisters. What's this?
+£4.50 UK Delivery or free UK delivery if order is over £35
(click here for international delivery rates)

The de Clare sisters Eleanor, Margaret and Elizabeth were born in the 1290s as the eldest granddaughters of King Edward I of England and his Spanish queen Eleanor of Castile, and were the daughters of the greatest nobleman in England, Gilbert ‘the Red’ de Clare, earl of Gloucester. They grew to adulthood during the turbulent reign of their uncle Edward II, and all three of them were married to men involved in intense, probably romantic or sexual, relationships with their uncle.

When their elder brother Gilbert de Clare, Earl of Gloucester, was killed during their uncle’s catastrophic defeat at the Battle of Bannockburn in June 1314, the three sisters inherited and shared his vast wealth and lands in three countries, but their inheritance proved a poisoned chalice. Eleanor and Elizabeth, and Margaret’s daughter and heir, were all abducted and forcibly married by men desperate for a share of their riches, and all three sisters were imprisoned at some point either by their uncle Edward II or his queen Isabella of France during the tumultuous decade of the 1320s. Elizabeth was widowed for the third time at twenty-six, lived as a widow for just under forty years, and founded Clare College at the University of Cambridge.

Warner’s book is a great joint biography and provides a valuable resource for historians. She has drawn extensively on the available sources to trace the movements and activities of the sisters, as well as their relationships with their husbands and children.

Edward II’s Nieces: The Clare Sisters: Powerful Pawns of the Crown was another enjoyable read on women in history that don’t always get the limelight that they deserve.

Kathryn Warner has done it once again by providing a well-written, well-researched, informative and engaging read.

I love this period of history and love learning about women’s roles, power, influences during this time. I would definitely recommend.

I’d still highly recommended this book for those interesting in the complex court of King Edward II and Queen Isabella.

Kathryn Warner's new book details the lives of the Clare sisters, nieces of King Edward II. They were grand heiresses and one of them was, perhaps, a royal mistress. This book offers a fantastic window into the lives of noble medieval women. As usual, Kathryn Warner delivered a readable and well-researched book that I literally devoured! I'm looking forward for more titles from this author (as always).

Overall, I found this book intriguing and complex. By telling the story of Eleanor, Margaret, and Elizabeth de Clare as three biographies in one book, Warner presents a new perspective into the life and reign of Edward II. The Plantagenet family during this time was a closely knit web of power that had to rely on each other to survive or to fall. If you want a great book to introduce you to three fascinating sisters whose marriages during the reign of the infamous Edward II transformed England then, “Edward II’s Nieces The Clare Sisters: Powerful Pawns of the Crown” by Kathryn Warner is a wonderful place to start.

I don't know nearly enough about these medieval monarchs and the women who shaped and moulded them. This is a time that Bernard Cornwell's Dark Ages saga pre-dates by about three hundred years, and follows the invasion of William of Normandy, of course. Fascinating, fills in lots of gap in my measly knowledge of this era of British and European history! 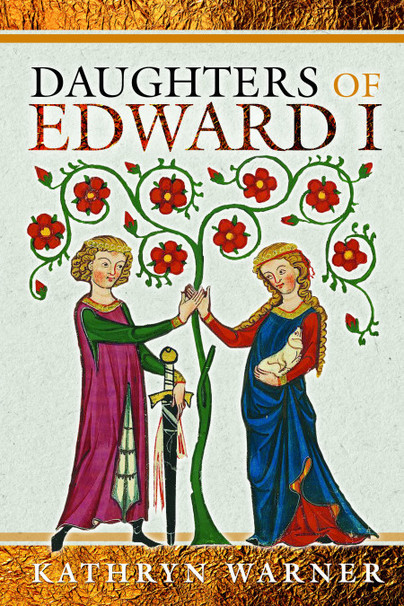 In 1254 the teenage heir to the English throne married a Spanish bride, the sister of the king of Castile, in Burgos, and their marriage of thirty-six years proved to be one of the great royal romances of the Middle Ages. Edward I of England and Leonor of Castile had at least fourteen children together, though only six survived into adulthood, five of them daughters. Daughters of Edward I traces the lives of these five capable, independent women, including Joan of Acre, born in the Holy Land, who defied her father by marrying a second husband of her own choice, and Mary, who did not let her forced…