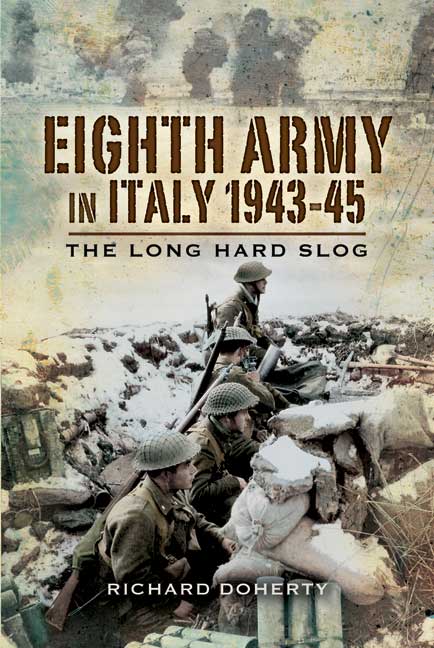 Click here for help on how to download our eBooks
Add to Basket
Add to Wishlist
You'll be £4.99 closer to your next £10.00 credit when you purchase Eighth Army in Italy 1943 – 45. What's this?
Need a currency converter? Check XE.com for live rates

Eighth Army, Britain's most famous field army of the twentieth century, landed in Italy in September 1943 and fought continously until the defeat of the Germans in early-May 1945.

This book studies the experience of Eighth Army in the Italian campaign, examining how a force accustomed to the open spaces of North Africa adjusted to the difficult terrain of Italy where fighting became much more a matter for the infantry than for the armour. It also compares the qualities of the commanders of Eighth Army in Italy: Montgomery; Leese and, finally, McCreery.

The book uses official records at various levels, personal accounts – some never before published – and published material to present a picture of an army that, although defined as British, was one of the war's most cosmopolitan formations. Its soldiers came from the UK, Canada, India, Ireland, Nepal, New Zealand, Poland and South Africa as well as from Palestine – the Jewish Brigade – and from Italy itself.

This book covers the period from the invasion of mainland Italy on 3 September 1943 to the German surrender in Italy on 2 May 1945, one day short of twenty months later.

This is a well written account of a long hard fought campaign that was won by an impressively multinational army (with contingents from Canada, India, Ireland, Italy, Nepal, New Zealand, Palestine, South Africa and the United Kingdom. One of the key topics is how the different commanders coped with their multinational force.

It is interesting to see how keen Eisenhower was on the invasion, and how valid the reasons actually were - the Germans did indeed have to replace a large number of Italian troops across the Balkans and on the Eastern Front, as well as fighting a costly campaign in Italy - many calculations of the impact of the Italian campaign tend to ignore the German troops tied up in the Balkans, Greece and the Aegean. The Italian campaign also pinned down Kesselring, one of the best German commanders of the war.

There is a clearer case for not pushing on up the Italian peninsula. However Doherty's account helps explain why the Allies didn't stop. Instead a series of tempting targets dragged the north, starting with the desire to capture and then protect the Foggia airbases, then the irresistible target of Rome, and finally the hope of a total victory in Italy.

This is an excellent account of this lengthy campaign, providing both an overview of events and detailed accounts of the fighting.

The invasion of Italy, infamously described by Churchill as the soft underbelly of the crocodile, did not result in the swift advance into Central Europe that the Allies had hoped, but became mired in a series of difficult and bitterly-fought engagements around a succession of German defensive lines until the end of the war. With the exception of famous battles such as Anzio and Monte Cassino, much of the campaign remains an unfamiliar subject to most, and it would be difficult to find a better introduction to it than this excellently researched account. It does not dwell on the innumerable political problems or the experience of the front line soldier, but concisely and chronologically details the expansion of the 8th Army's campaign from their arrival in Calabria in September 1943 to the conclusion of hostilities in May 1945. It is, therefore, a superb guide for anyone seeking to understand the course and context of the Italian campaign.

This book is an excellent, well considered reference.

This exceptionally well written and exhaustively researched book is the essential guide for anyone with an interest in the fighting in Italy during the Second World War.

This authoritative account highlights the multi-national make-up of what was known as a British Army.