Add to Basket
Add to Wishlist
You'll be £16.99 closer to your next £10.00 credit when you purchase England's Cathedrals by Train. What's this?
+£4.50 UK Delivery or free UK delivery if order is over £35
(click here for international delivery rates)

One of the jewels in the nation's crown is its Anglican cathedrals. Many, constructed after the invasion of 1066, stand as monuments to the determination and commitment of their Norman builders. Others have been built in later centuries, while some started life as parish churches and were subsequently raised to cathedral status. Places of wonder and beauty, they symbolize the Christian life of the nation and are visited today more than ever, as places that represent England's religious creed, heritage and the skills of their builders.

Eight hundred years later came the Victorians, who pioneered the Industrial Revolution and created railways. Like their Norman predecessors, their creations were built to last: the railway system bequeathed to later generations has endured in much the same form as when it was originally constructed and there is certainly little sign that railways will be displaced by other modes of transport in the foreseeable future.

Murray Naylor was very passionate taking the time and effort researching the history of each Cathedral and sharing with us the vibrant photos of impressive exemplifications and allowing us to journey through the remarkable history of England’s Cathedrals. Not only do we see the wonders of England but also the course of travel to take us from one destination to another. To take this journey is by the most exciting way to travel, by train! Traveling by rail there are some outstanding access to England’s Cathedrals. You will learn about the different types of railways, and what type of transport there are and the development of continuous improvement of the railway and how it’s influence to future destinations. We’ll see why it’s impelled as an outstanding way to see the sites and with a remarkable sensation of just traveling with no worries. Some people forget the hassle free riding of the rails, but what better way to see these vigorous and stimulating Cathedrals. The people who built these great Cathedrals were master masons, who better to create and construct such unique structures. I’m at awe at the knowledge back then, the physics to design, and the performance of the architecture, each Cathedral is uniquely different, from the design of the nave arches that seem to soar so high. The huge pillars and the lierne vaults, and from simple to elaborate roof bosses to the tall stain glass windows that beautifully show their spiritual of the past. You will also see Cathedrals that are made of sandstone and how time has aged them, the stones have turned black while making its characteristic style more attractive.

A very interesting book and a magnificent image file.

I believe this may be a new edition of this iconic book, because I'm sure I've reviewed it several years ago. It remains one of the best books on visiting iconic church buildings across Britain by railway. Brilliant.

As featured in 'New Book Releases' 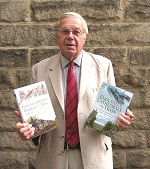