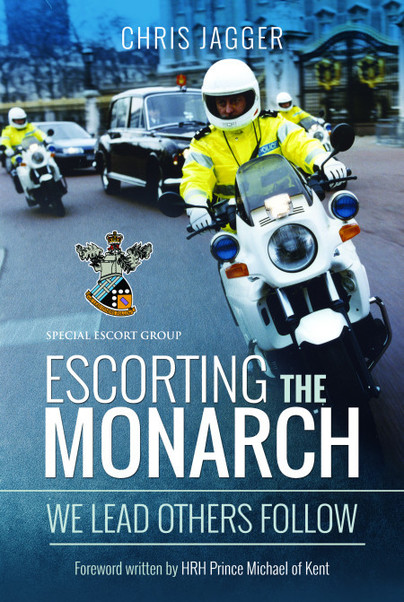 You'll be £10.39 closer to your next £10.00 credit when you purchase Escorting the Monarch. What's this?
+£4.50 UK Delivery or free UK delivery if order is over £35
(click here for international delivery rates)

Escorting the Monarch is as close to an official history of the Metropolitan Police's 'Special Escort Group' (SEG) as one could hope for.

You may have seen the team at work; as the combination of motorcycles and cars pass you by, they glide elegantly and seemingly effortlessly through busy traffic. Developing a dedicated and diligent team culture, they are masters of their trade. They hold a well-earned reputation for excellence amongst their peers; delivering their passengers (and cargo) on time, safely, in a great deal of style, and without fuss or mishap. Professional and precise in the execution of their operations, they are neither shaken nor stirred.

Although the work of the SEG demands exquisitely high levels of presentation there is little room for gloss or glitter. The individuals and property they are charged to protect are assessed by government to need the highest possible levels of protection. From queens, kings, presidents and emperors, to priceless works of art, terrorists and high risk prisoners, the group escort them all.

Written by the son of a retired SEG officer who himself served in the British Government's security and intelligence community, Escorting the Monarch is told, in part, through first hand stories and anecdotes gleaned from former officers of the group. The insights offered are unique, privileged and first of their kind. Chris Jagger unfolds a collection of fascinating and never before told stories built on high profile events, such as the funeral of Sir Winston Churchill, and the visit of Nelson Mandela.

Now the SEG have honed their skills for over 6 decades. Through a carefully constructed description of a changing security and political environment across the decades, and an insightful analysis of the ingenuity of those who have served with the SEG, Escorting the Monarch explains the events that made the group who they are today.


An interesting look at the SEG team, the team that provides the motorcycle protection and escorts to all sorts of people, especially the royals, and dignitaries from all over the world.

Being Australian, this display of precision riding etc is not exactly something I see every day and not something I had really given much thought, to be honest, so to read about how the team prepare for an escort was truly fascinating. From rehearsing the different roles of each team member, to practising the route (if known in advance) and making sure both the bike and every aspect of their appearance is just right, there is a lot that goes into this role. I am sure that with even more threats coming from all sorts of directions, it is hard to keep on top of every possible scenario but it seems to me that these men and women do everything humanly possible to keep their person safe and to seamlessly make sure they get to where they are going, on time, every time.

I have great admiration for the SEG team members after reading this book. And due to growing up with a dad who was motorbike mad (and who had a lovely BMW bike himself), I got a bit nostalgic too!

Really enjoyed this book. It was a great insight into the job and all it involves! Some great historical moments were featured and the stories were fascinating!

I hadn't appreciated that there an entire police department that dealt with VIP escorts, so found this book informative.

It was like lifting the corner of a screen to get a glimpse into the lives of some of the clientele of the service, as well as revealing a side to Her Majesty the Queen which one gets to hear about in general terms, but the occasional glimpse through this book shows the reader so much more of why she has been such an inspirational leader.

It is not all about the Queen and never feels like a "talking out of shop" type of book, but the mentions are good to read.

There is a rich history which this books covers in an easily digestible manner.

This fascinating book is the story of the Special Escort Group (SEG).

Right from the beginning it seems that they have been able to strike up a direct relationship with whomever they escorted, a relationship that went beyond being merely escort outriders, and there are numerous stories of how Princess Diana, Margaret Thatcher, President Bush, Prince Charles and Nelson Mandela, amongst others, responded to and reacted to the SEG riders who escorted them. Fascinating stuff.

Chris Jagger is the son of a former member of the Group and was occasionally allowed inside the team, as an observer, as an assistant on a security check for a major event and, when a child, frequently as a guest at their Christmas parties. His history of the SEG is a chronological account of events, personalities (both escorts and escorted) and machines: each section ends with a neat line drawing and description of the motorbike used in that decade. The photographs include some of their major assignments and examples of their photo-shopped Christmas cards, sent each year to their regular customers.
He’s produced a lively record of the work of a well-known but previously undocumented police unit.

A well written account, with fabulous photographs, of the Special Escort Group (SEG) from its foundation in the early 1950s to the present day, with a foreword written by Prince Michael of Kent who considers them to be the best in the world...

This is a book that I shall definitely be adding to my collection.

It is very unusual to find a police history that concentrates on Traffic even though this is a very specialist sub-set of the role. If you are interested in Police history, Traffic and motorcyclist this is a combination of a book for you not to miss. For the more general reader it opens doors you never knew were there and is therefore full of interest.

We from The New Royalty World knew the SEG only from TV with Royal events, This book was/ is a very pleasant introduction to the SEG.
A wonderful behind the scenes view into a one of the worlds most elite police units. Lots of previously unseen historical information. The info and stories which been told in the book, you don’t read about in the history books.
Those kinds of stories are what makes this book so much more than just a “history” book about a British motorcycle patrol. We do not call it a history book but an ode to the SEG members with their responsible work.

The UK is renowned for the excellence of its ceremonial events. The Special Escort Group is an adjunct to such events but also has a very practical purpose. Having travelled with five prime ministers, I have had the privilege of seeing the operations of the Special Escort Group at first hand. Their pride in their work and its high quality shines through every page of Chris Jagger’s book, told entertainingly through specific episodes.

It's a great book. My husband bought a copy, I picked it up and couldn't stop reading it! Thank you.

This is one of those books that gives the reader a real feel for the job. The authors use of the first person perspective puts you in the driving seat or on the bike, and makes it feel very real. I had the privilege of working on the Special Escort Group, but still couldn't put the book down! Well done Chris Jagger for having taken the time to share this wonderful insight behind the closed doors of such a private and very special group. The book is a fitting piece to honour those who set up and maintained the very high standards that such work demands. It's a really good read.

Well worth the wait. A great historical record of the group, mixed with enough personal accounts to really feel the heart Of the SEG. So fascinating I couldn’t put it down. Can’t wait for the next installment. Congratulations Chris

The author’s style is readable and it is evident that he knows his subject. As a result, this volume may appeal to the general reader who is seeking an undemanding tale that gives a ‘Once over lightly’ introduction to a hitherto unknown organisation. Because of its subject, this book is likely to also appeal to both Motorcycle and Police ‘enthusiasts’. The descriptions within this volume might also be of interest to both political and social historians researching Post-WWII Great Britain.

A fascinating, behind the scenes view into a one of the worlds most elite police units. Loved the personal stories and the authors analysis. Lots of previously unseen historical information. Highly recommended.

Chris’s fascinating account of the SEG makes for compelling reading. It relates both from a historical and current prospective with engaging anecdotal memories, the ethos, mystery, and devoted cultural heritage that makes the SEG what it is - the acknowledged master of high profile security in a fast moving environment. For me is a must read.

This book is simply fantastic, having seen the SEG police riders at work, this book gives you the insight of what it takes to be a SEG rider, I truly admire these guys, if you want to understand the true professionalism, this book is a must.

I read this book not having ever heard about the SEG unit and I found it absolutely thrilling. To get such an inside look into historic moments, told from a perspective that is rarely visible to the general public was amazing.

The anecdotes about some of the incidents are truly unbelievable, to hear that the first women to go into space ordered the SEG unit to stop because she wanted to make sure that a member of the unit who had been in an accident was not badly injured is something you don't read about in the history books and that consequently she became friends with some of the members of the unit, and this is a Russian woman befriending British officers at the height of the Cold War.

Those kinds of stories are what makes this book so much more than just a history book about a British motorcycle patrol.

A very fascinating book, one that I would truly recommend.

Escorting the monarch is full of fascinating details sure to make it interesting both to those who know a bit about the Special Escort Group and those who have not heard about the SEG before. The author Chris Jagger is a son of a former SEG officer and the book is very personal and at the same time unique. His interviews with former SEG members shed new light on historical events often with new information about world leaders. Anyone looking to learn more about the Special Escort Group should not miss this book. I HIGHLY recommend this book.

A Londoner by birth, Chris Jagger is the son of the retired SEG officer. Inspired by his dad's own career, he pursued a path of his own working for the British Government, United Nations and NATO in the field of counter organised crime and counter terrorism. His work has taken him around the world, living a numerous countries, but he now resides in Northern Europe. Chris works independently as a teacher, consultant and writer. He proudly serves as professor of Intelligence Analysis at Universidad Rey Juan Carlos in Madrid.