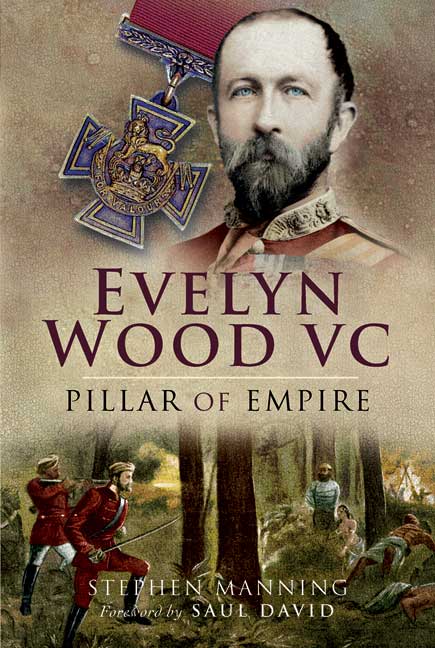 Click here for help on how to download our eBooks
Add to Basket
Add to Wishlist
You'll be £4.99 closer to your next £10.00 credit when you purchase Evelyn Wood VC - Pillar of Empire. What's this?
Need a currency converter? Check XE.com for live rates

Given the increasing interest in the Victorian era an authoritative biography of Field Marshal Sir Evelyn Wood VC is long overdue. By any standards his career was remarkable and began with him in the Royal Navy in the Crimea before he transferred to the cavalry 'to see more action'. He won his VC in India and became a member of Wolseley's select Ashanti Ring which ensured his advancement. His greatest victory at Kambula was preceded a day earlier by a crushing defeat at Hlobane which he attempted successfully to cover up. However the ruthless slaughter of the defeated Zulus after Kambula also threatened his career. Thanks to powerful friends including Queen Victoria, Wood's career continued to flourish although a major scandal involving his sister (Kitty O'Shea) and leading Irish nationalist Charles Parnell raised serious questions as to Wood's integrity.
Nevertheless he went to be Adjutant-General and a Field Marshal and was one of the major reforming generals laying the foundations for the Army's success in The Great War.This is an important biography filling a major gap in the bibliography of the period.

A darned good read...The author has delved into archival sources to bring alive the story of Evelyn Wood. Overall, well worth reading and a fine addition to your military library.

It is quite extraordinary that no serious study of Evelyn Wood has been made since his own autobiography published over a century ago. As one of the senior military figures of the Victorian age, his story is one of great adventure and derringâ€“do, tremendous personal courage, military and personal controversy. This, all wrapped up in an odd personality, makes for a splendid story and, in the hands of Stephen Manning, a darned good read.

For students of the Great War, it is the latter part of Wood's career that will be of most interest. He was a great trainer of men, and both before and after the war in South Africa (1899â€“1902) was deeply involved in the reform of the British Army's approach to training and logistics. The performance of the "Old Contemptibles" at Mons and on the retreat has distinct roots in Wood's work. Wood's sponsorship of Douglas Haig, his potential spotted as a young cavalry officer, is also clearly of significance.

But for sheer human interest, it is Wood's involvement in the Indian Mutiny, Zulu and Boer wars that grips the reader. Wounded and near to death on numerous occasions, he always pulls through and in so doing, hauls himself up the military ladder despite the undoubted constraint of not been well to do and with personal and family complexities with which to contend. Calamity at Majuba Hill and at Hlobane, enough to consign an ordinary man to the darker pages of history, were almost shrugged off by Wood. He appears to have been something of a politician (with a small p) as well as a fine if rather unpredictable soldier.

The author has delved deeply into archival sources to bring alive the story of the man. Overall, well worth reading and a fine addition to your military library.

Dr Stephen Manning is an Honorary Research Fellow in the History Department at the University of Exeter and has made a special study of Victorian military history. In addition to publishing many articles in academic journals he has written several books including Evelyn Wood VC: Pillar of Empire, Soldiers of the Queen, Quebec: The Story of Three Sieges, The Martini-Henry Rifle and Bayonet to Barrage: Weaponry on the Victorian Battlefield.