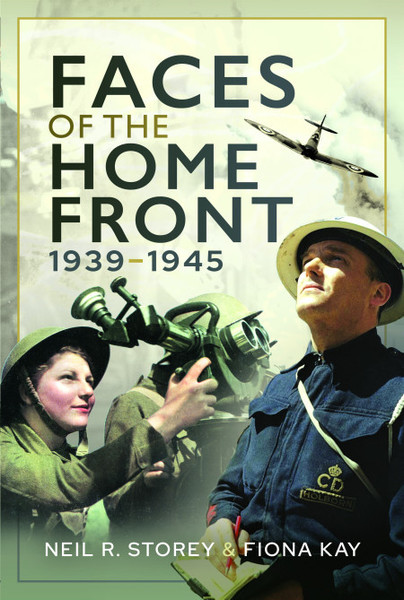 Click here for help on how to download our eBooks
Add to Basket
Add to Wishlist
You'll be £4.99 closer to your next £10.00 credit when you purchase Faces of the Home Front, 1939–1945. What's this?
Need a currency converter? Check XE.com for live rates

Faces of the Home Front presents a fascinating insight into the people, wartime organisations, events, life and work on the British Home Front during the Second World War. This is the story of ordinary people in extraordinary times told through an array of previously unpublished rare photographs, illustrations and ephemera. If you have wondered how Air Raid Wardens, Ambulance crews, Home Guard, Firemen, Special Constables, Women's Voluntary Service and the Women's Land Army were recruited and trained, how they were uniformed and what their duties entailed in wartime were, this is the book for you.

Drawing on the authors’ own extensive archives of original photographs, training manuals, documents, decades of research and interviews with those who were there, there are stories of well-known events such as the Blitz on London and many other often lesser known events and incidents around the country, some deeply moving, some harrowing and some that show how the kindness and selfless bravery of people that helped get Britain through its darkest hours. The combination of images and stories vividly bring to life the experiences of people in cities, towns and countryside in wartime as they experienced evacuation, rationing, the black-out and air raids touched the lives of everyone. This volume is a valuable addition to the bookshelf of any family historian, collector, re-enactor.

"Drawing on the authors' own extensive archives of original photographs, training manuals, documents, decades of research and interviews with those who were there, there are stories of well-known events such as the Blitz on London and many other often lesser known events and incidents around the country, some deeply moving, some harrowing and some that show how the kindness and selfless bravery of people that helped get Britain through its darkest hours, The combination of images and stories vividly bring to life the experiences of people in cities, towns and countryside as they experienced evacuation, rationing, the black-out and air raids touched the lives of everyone. This volume is a valuable addition to the bookshelf of any family historian, collector, re-enactor."

I would recommend this book to all who are interested in the study of wartime Britain. It is more than capable for use as a text book for the student of wartime history and also gives reference to the clothing and fashions of the day, essential for anyone wishing to replicate that clothing in either a scale model or the real thing.

A superb and intimate look at the people who kept Britain going at home whilst our troops, a huge number of the male population were fighting on various fronts against the axis countries during WWII. Neil Storey is one of P&S's very best authors, and his style is brilliantly informal and informative, educational yet entertaining at the same time. Absolutely brilliant!

This book takes a really good look at ‘people’ rather than the war that went on, so it was quite an interesting read especially if you like your social history. The book reveals quite a bit about the various organisations involved in supporting the war effort and really show much people were willing to work hard and do their bit for King and country. A very good book and will appeal to a wide range of people but especially those at university wanting to gain a wider knowledge about the war.

There are many moving stories from WWII but some of the most poignant ones are the stories of the people of Britain who, with the Commonwealth, stood alone against the Nazis. This is an excellent book on the people who fought on the front lines, even though those front lines happened to be right in their own homes.

It covers all aspects of the bravery of the Blitz from the common person in the street to the various groups and organizations that rallied to maintain some semblance of order and security when the world was, literally, blowing up all around them. While other books that focus on one thing or another go into much deeper analysis, this book gives a satisfying overview of what life must have been like. It talks about the people who worked on the land and in the home front services. It talks about the children and parents who were separated both before the bombs fell and afterwards. It talks about those at home with loved ones in the fight or in a prisoner of war camp or worse still whereabouts and conditions unknown.

It is a thorough rendering of what life was like during those years without being heavy handed or ponderous as some histories can become. Set up in short chapters, the reader could devour the book in one go or take it in bit sized chunks. For those interested in the human side of the war, it is an excellent book.

This was a fascinating look at the people who lived survived on the home front. From the children who were taken out of their family to live for their own safety. The gas masks that became a normal part of life. The fear of being bombed this book really explains what the home front felt life. The photographs really enhanced our understanding.

I read a lot of books set in UK during WWII but this book made me meet the people who lived through the war and understand how hard it was.
The pictures were fascinating, heartbreaking and I was struck by the faces and what I read.
It's an informative, heartbreaking and fascinating book, full of food for thought.
Highly recommended.

This is a fascinating book that really gives the reader a view of war from the home front. The pictures really added a lot to it.
The part about the different types of gas masks was informative to me as I never realized there were more than one type. To see the pictures of them men, women, and even children and babies wearing those gas masks was heartbreaking but they seemed to adjust to life in war and having to carry the masks all the time.
I was also impressed with how organized each division of labor was and how it greatly included women and even older children.

The book will transport you to a time in history where you hope things will never be repeated. It is a fascinating insight into the lives and times of men and women who did so much on the British Home Front during the Second World War. They worked tirelessly in helping with the health, welfare and security of the people of Britain.
The authors' have accomplished a phenomenal feat to put this excellent publication together. Filled with many coloured and black & white photographs. It also has beautifully illustrated posters, ration books, and certificates.
Some of the pictures are harrowing and show the nightmare experiences of war. You can see in some of the faces and pictures the trauma of war.
Heart-breaking and moving, thought-provoking and enthralling, this is a moving account that sheds light on heroes and heroines.
The authors cover all the important feats and achievements that the organizations managed to achieve, a lot behind the scenes, which were a real eye-opener.
There is some interesting material that has been rescued from the archives. The authors should be given credit for publishing it in this volume. Notes are accompanying the book, a Bibliography and a further reading list, which is okay if you want to delve deeper.
Faces of the Home Front, 1939–1945 is a book that would be a worthwhile addition to any reference library.
I recommend this highly as it is a fascinating and extraordinary read.