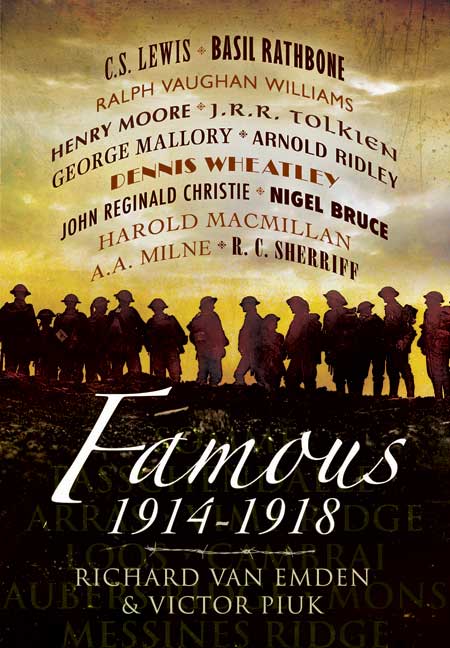 Click here for help on how to download our eBooks
Add to Basket
Add to Wishlist
You'll be £4.99 closer to your next £10.00 credit when you purchase Famous. What's this?
Need a currency converter? Check XE.com for live rates

Famous tells the Great War stories of twenty of Britain's most respected, best known and even notorious celebrities. They include politicians, actors, writers, an explorer, a sculptor and even a murderer. The generation that grew up in the late 19th Century enlisted enthusiastically in the defence of the country. Many would become household names such as Basil Rathbone, the definitive Sherlock Holmes, AA Milne, creator of Winnie the Pooh, and Arnold Ridley who found fame and public affection as the dour Scotsman Fraser, and the gentle and genial Godfrey, in Dad's Army. From politicians such as Harold Macmillan and Winston Churchill to writers including JB Priestley, and JRR Tolkien, from sculptors like Henry Moore, to composers such as Ralph Vaughan Williams, their fame and influence continue even into the 21st Century.

The authors have discovered the exact locations where these celebrities saw action. They tell the story of where CS Lewis was wounded and invalided home, and how Basil Rathbone won the Military Cross for a trench raid (while dressed as a tree). Each story is examined in detail with pictures taken of the very spot where the actions took place. There are maps of the area that will guide enterprising readers to walk in the footsteps of their heroes.

There has been a tendency in the past for writers’ lives to be ignored and to concentrate mainly on their writing careers. This brilliant little book looks at a number of men who served in the Great War, some of whome survived, some of whom did not. Richard Van Emden is an acknowledged expert on WW1 – but this time he delves into the lives of writers we all know and love, and many of whom I had no idea about. Fascinating.

This is a fascinating book about the experiences of men who served in the First World War and who later became well-known and even "famous" - such as Basil Rathbone who was the very best Sherlock Holmes and C S Lewis who wrote the chronicles of Narnia.
Their personal recollections captured through letters home or post-war reminiscences give fascinating personal insights into the men themselves and different perspective on the war

This is a very easy to read book taking a look at some well-known British characters and telling us about their WWI experiences - an insight into famous people we know to be famous for other reasons. A very interesting and informative read.

I found this book brilliant. Each chapter is devoted not just to the wartime experiences of a different "celebrity" but also to their earlier and later life. As such, it is easy to pick up and put down and read over several weeks or inbetween other books. There's also a nice selection of photos, although more of these would have been welcome.

In educational terms, the book is very good at making the reader reflect on the question: "If these are the sorts of scientists, writers, politicians and so on who thankfully survived to enrich the world for the better, how many more did we lose in that terrible war whose gifts were lost forever?"

The authors have taken advantage of the much improved access to information that the release of soldiers documents and the internet have provided in recent years, to compile an authoritative story that is full of interest... It is an absorbing book, repays reading and is good value for money.

This work profiles British me who fought in WWI, who would later become famous in many different areas. Those profiled includes authors, J.R.R. Tolkien and A.A. Milne, actors Basil Rathbone and Nigel Bruce, sculptor Henry Moore, future prime ministers Winston Churchill and Harold Mcmillan., and John Christie, an infamous mass murderer. Each chapter gives a detailed account of the person's war service, usually focusing on one significant event or battle, and ends with a brief overview of the person's life and accomplishments after the war. The book includes a section of 50 black and white historical photos.