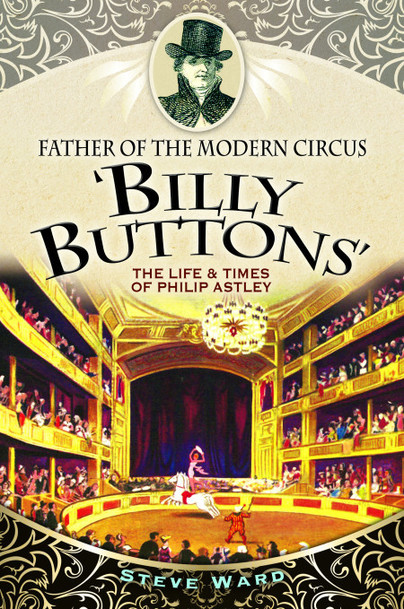 The Life & Times of Philip Astley

Click here for help on how to download our eBooks
Add to Basket
Add to Wishlist
You'll be £0.99 closer to your next £10.00 credit when you purchase Father of the Modern Circus 'Billy Buttons'. What's this?
Need a currency converter? Check XE.com for live rates

The world of the circus has a long and colourful history but it was with a man named Philip Astley that the ‘modern’ circus was founded. It was 250 years ago, in April 1768, that Astley pegged out a circular ride on the banks of the river Thames and gave performances of trick riding to a paying audience. Trick riding was nothing new, so what made Astley so popular? He was an accomplished horseman, a military hero and an instinctive showman. Above all, he was an entrepreneur who realised that people would pay good money to be entertained – and to be entertained well. He created the comic character of Billy Buttons, and other acts were added to his performances: clowns, rope dancers, tumblers and strongmen. The circus, as we might recognise it today, was born.

Father of the Modern Circus – ‘Billy Buttons’ investigates the life and times of this veritable giant of the circus world. Standing well over 6 feet tall, with a stentorian voice and character to match, it was difficult to ignore him wherever he went. From his early days as an apprentice cabinetmaker and his military exploits in the 15th Dragoons to the trials and tribulations of establishing himself as a respected performer and his international successes in France and Ireland, this book gives a detailed account of the larger than life figure that was Philip Astley.

Ward meticulously follows the ups and downs of a man whose life reads something like the script of a blockbuster movie.

This is a useful, readable and entertaining study by an expert who is immersed in circus culture: Steve Ward is a former performer, teacher and director of a youth circus. If you are interested in the history of live entertainment or simply want to read about an extraordinary character who displayed a precocious grasp of marketing to promote his product and beat the opposition, it is highly recommended.

"The Father of Modern Circus - The Life and Times of Philip Astley" pulls together the wide range of information available on the great man (while even unearthing more) and ends up contributing a worthwhile tome to celebrate Circus 250.


Yes, Astley is considered "The Father of Modern Circus" but this book rightly places him within his historical and artistic context; honestly pointing out his faults and highlighting the innovations he implemented. Because of this we have the sense of the man, and not solely the mythology that links us to him. Those interested in the art form will learn about the roots of what we have today and those of us that have spent years within it will discover more of what we love about it.


Happy Birthday Circus, and with this book we have yet more to celebrate.

Phillip Astley was born on 8 January 1742. Standing well over 6 feet tall, with a stentorian voice and character to match, it was difficult to ignore him wherever he went.