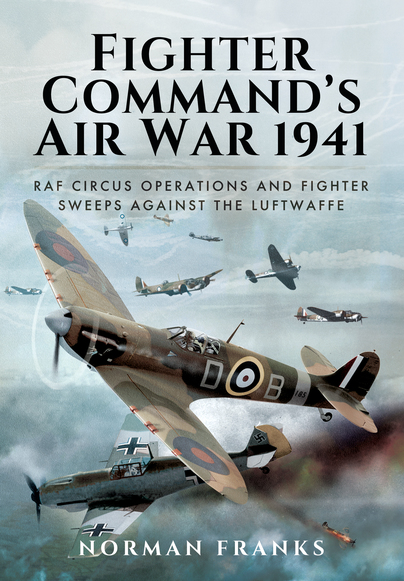 RAF Circus Operations and Fighter Sweeps Against the Luftwaffe

Click here for help on how to download our eBooks
Add to Basket
Add to Wishlist
You'll be £4.99 closer to your next £10.00 credit when you purchase Fighter Command’s Air War 1941. What's this?
Need a currency converter? Check XE.com for live rates

Following the Battle of Britain, the RAF started taking the air war to the Germans. A small number of bombers, escorted by large numbers of fighters tried to force the Luftwaffe into battle. Much air combat ensued with RAF light bombers escorted by scores of fighters, but it was not until Germany invaded Russia in June 1941 that operations were stepped up in an effort to take pressure of Stalin’s Russian Front. Two major German fighter groups, JG26 and JG2, were, however, more than able to contain the RAF’s operations, generally only intercepting when conditions were in their favour. As the author describes, over-claiming combat victories by pilots of both sides is amazing, and several of the top aces had inflated scores. Fighter Command, however, lost massively even though they believed they were inflicting equal, if not better, losses on the Luftwaffe. This battle of attrition was virtually a reverse of the 1940 Battles over England, and pilots who had to bale out over France, were lost completely.

The book covers the 100+ Circus operations and their accompanying fighter Sweeps in detail, whilst also mentioning lesser operations where the RAF were concerned. The tactics employed by both sides are examined and show how each fighter force quickly adapted to changing conditions tempered by experiences gained in air combat.