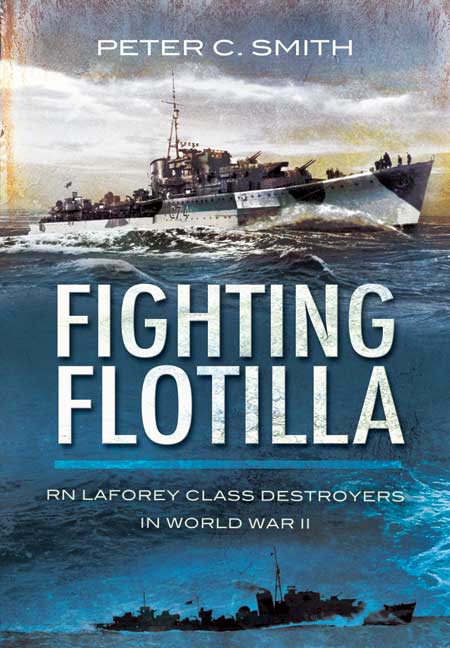 Click here for help on how to download our eBooks
Add to Basket
Add to Wishlist
You'll be £4.99 closer to your next £10.00 credit when you purchase Fighting Flotilla. What's this?
Need a currency converter? Check XE.com for live rates

The ‘Laforays’ were the largest, most powerfully armed and successful ships of this type to see frontline action with the Royal Navy in WWII. They were also the handsomest warships to see service and presented a perfect combination of power and speed. They were assigned to the most dangerous theatres of war including Force H, sailing between Gibraltar and Malta, from where they operate against the German supply lines to North Africa. They escorted minelayers into the German backyard in the North Sea and their convoy escort work in the North Atlantic proved them to be highly effective hunter killers of the U-Boat packs that threatened every cargo ship carrying vital supplies to the UK. Such was the pace of their war, that out of the eight ships of the class only one survived the war.

The book also includes chapters on their origin, planning and building, wartime operations and indices cover weapon systems, general fittings and complements and battle honours for each ship in the class.

The latest in the author's prodigious achievement...is typical in its focus on the technical and tactical minutiae of surface and air weapons systems. By far the most interesting chapters are oddly enough not the accounts of the wartime careers of the eight Laforey class destroyers he investigates but the two chapters on the pre and early war debates about design of the ships.

Overall it remains an interesting and enjoyable read, well up to the standards of what has become a veritable library of this author's work.

The Laforey Class destroyers arguably represented the zenith of British destroyers. Large, fast, heavily armed and impressive looking, they were also very successful at war. This well written and illustrated book describes their conception, design, development construction and operations. It makes for an exciting and interesting story. The Laforeys were very effective weapons platforms that were generally very well commanded and crewed. They contributed substantially to the success of the Allies in many theatres but, most particularly, in the mediterranean. The author has done an excellent job of returning these fine ships to life.

This excellent, well-researched and well-written book, which was first published in 1976, contains interesting material from survivors which have been built into the narrative to produce an interesting and detailed history of these fine ships. The book is good value for money and is recommended.

The "Laforays" were the largest, most powefully armed and successful destroyers to see frontline action with the Royal Navy in WWII. Generally seen as handsome warships with a well balanced appearance, they presented a superb combination of power and speed.

Full coverage is, perhaps unusually, given of the discussions and considerations in the design and specification of these eight ships which were built between February 1941 and November 1942, with two built by Yarrow of Scotstoun (Laforay, adopted by Northampton & Lance, adopted by Bexley and Welling), two by Cammell Laird of Birkenhead (Larne and Lively, adopted by Guildford), two by Parsons/Hawthorn Leslie of Hebburn (Legion, adopted by Cheltenham & Lightning, adopted by Doncaster) and two by Scotts of Greenock (Lookout, adopted by Burnley & Loya, adopted by Cambridge).

Nearly half the book is taken up in the history of the names and the development of this class of destroyer, leaving the second half to cover some dramatic fighting of gallant men with worthy ships. The narrative of the battles is well explained, and there are many personal quotes and extracts that make it both personalised and balanced with the other ships present. As a naval war story, the reading is highly recommended and, with the comprehensive background it really is a complete story.

The "intended" Larne was never actually named as such, being launched as Gurkha after the Tribal Class destroyer of that name which had been sunk off Norway in 1940. The men of the Gurkha Regiments subscribed a day's pay per man to replace her and Larne was thus renamed in their honour and adopted by them.

These ships served in the most dangerous theatres of the war, including Force H, sailing between Gibraltar and Malta operating against the German supply lines to North Africa. They escorted minelayers right up to the German dorrstep and their convoy escort work in the North Atlantic proved them to be effective hunter killers of the U-boat packs. The Mediterranean was probably their heaviest battleground with Malta convoys and supporting assaults on the Italian islands and mainland.

This book is unusually well illustrated by drawings and a good collection of photographs. Appendices include a great deal of information that is rarely included in such detail on the Original Weapons System (guns and torpedos) and the Fire Control System, and the General Fittings and Complements. The planned manning was 201, including 42 in the engine room, 8 telegraphists and signalmen.