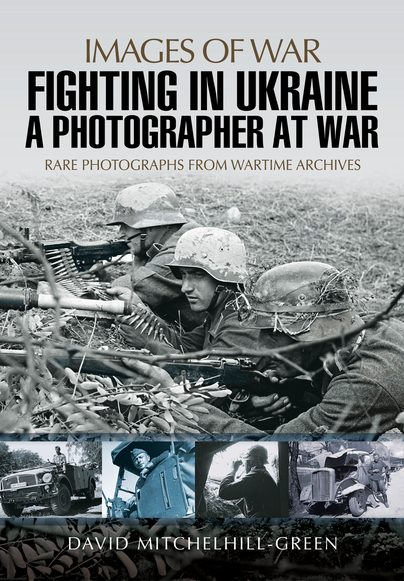 A Photographer at War

Click here for help on how to download our eBooks
Add to Basket
Add to Wishlist
You'll be £4.99 closer to your next £10.00 credit when you purchase Fighting in Ukraine. What's this?
Need a currency converter? Check XE.com for live rates

The outcome of the Second World War was decided on the Eastern Front. Denied a swift victory over Stalin’s Red Army, Hitler’s Wehrmacht found itself in a bloody, protracted struggle from late 1941 that it was ill-prepared to fight.

Although many pictorial books have been published on Germany’s hapless invasion of the Soviet Union, they are typically a collection of soldiers’ snapshots or ‘official’ photographs taken by Propagandakompanien (PK) reporters. This book is different. It contains an extraordinary personal record of the war captured by a professional photographer, Walter Grimm, who served in the German Army in a communications unit.

David Mitchelhill-Green brings Grimm’s previously unpublished photographs together with a carefully researched introduction. The 300 evocative black and white images provide an absorbing insight into the daily life and privations of the ordinary German soldier amid the maelstrom of history’s largest conflict. The Ukrainian people, many of whom initially welcomed the Germans as liberators, freeing them from the yoke of Bolshevik oppression, are also chronicled in this fascinating study of the fighting in Ukraine.

Pages and pages of high quality photos, accompanied by maps and text, make this book a treasure for any library.

This is another book in the superb Pen and Sword collection Images of War. The author David MitchelHill Green has a masters degree in history and writes for a number of magazines and papers. He has searched the globe for lost military stories which has been the basis for photographic investigations on which some of his magazine work has been based.

The "star" of this book however is Walter Grimm a professional photographer who was conscripted into the German Army and served 1941 - 1943 in the Ukraine. We are told that Grimm's record of that period is presented here in it's entirety for the first time.

As often in this series the front cover sets a striking indicator of what we can expect inside the book.The main picture is a MG34 crew set up in what looks to be a defensive position with belt inserted and stick grenades to hand. A third man has his K98 in the shoulder and all three look ready for action.

The book itself is 175 pages long with most pages containing two sometimes three photo's. Walter Grimm's photography combined with MitchelHill's clear concise writing takes us from training in chapter one "Preparing for War" to Chapter nine "The dead and the decorated"
Using Grimm's photographic record you can almost see how the campaign is being fought from the looks on the faces of his fellow soldiers.

We open with smiling soldiers in training and preparing for war and close with stern faced soldiers celebrating Christmas knowing they are on the retreat.

Each page has simple but interesting and in some cases powerful facts from the author and he has clearly researched his work even down to the point of accompanying a picture of a 1932 Ford BB with the statement that the curved headlights were straightened out on the 1937 model. Each fact is concise; for instance Hitler's 1933 decision to motorize the army led to the deterioration of the railways which would prove costly when you've an extended supply chain.

Fascinating facts such as some of the German Army maps were poor quality with one officer complaining that his map dated from 1870 captured Russian maps were described as "toilet paper" having no markings and villages frequently shared the same name which meant units missed target or simply got lost.

The Ukrainians held a deep seated hatred of Stalin but the Germans failed to capitalise on this instead Hitler's hatred of the inferior Eastern People led to mass deportations and suffering unparalleled in any other European Country. Approximately 6.6 million Ukrainians or 30% of the population died of hunger and disease or killed by the Germans during the occupation with another 2.3 million deported to Germany as slave workers.

The Eastern front held a particular problem in that as fast as they advanced, not only did this stretch supply lines but weakened the Army by having more ground to defend. One senior Panzer officer stated the Army could be destroyed simply by winning.

By September 1941 almost 500,000 Germans soldiers and officers were officially listed as casualties.

Walter Grimm, without whom we would not have this book or these images, I'm glad to say made it from conscription in 1940 to the end of the war and died an old man in 2002 in Australia.

With current events in the Ukraine and Eastern States of Europe making news at the moment it might be worth £14:99 of your money just to remind yourself what that region has been through in the past. It's been said in order to view the future you must study the past; well I would suggest that this book is as good a place to start. Clear, concise, factual and easy to read it doesn't bog you down in technical jargon and chapters don't drag or lose content halfway through.

Clear, concise, factual and easy to read it doesn't bog you down in technical jargon and chapters don't drag or lose content halfway through.

I think the best part of this book, is how the photographer’s and the author’s work have combined into something greater than the words or pictures themselves. Their work has combined into a snapshot of history that pulls the reader into the German Army, into WWII, into the daily lives of those men, the men who made our history.

...Till I read this book, I never would have believed the German’s used camels in Ukraine in WWII.

Like other books in this series, Fighting in Ukraine provides a welcome change from the typical photographic coverage of the war, in which the same images seem to be used in volume after volume. The detail and subject matter of these 300 images will prove a treasure trove for military modelers and historians alike.

To start with then, it is interesting to note the humanising effect the images herein promote. It is perhaps harrowing in a sense, to see the people in these photographs as people; as in some ways it goes against a heavily entrenched worldview that these people had to be inherently evil to be a Nazi. I’m actually very pleased that this is the effect it has had on me, and certainly the largest thing I will take away from the experience.

There are some absolutely stunning vistas featured in the book, and that is a testament to Walter’s skill with the camera, as he wonderfully juxtaposes machine against nature, which of course, seems to be these Landser’s main foe. As natural as it seems in a chronicle, the collection does feature images of the occupation and aftermath stages of battle. Succinct as it is, for a book to have such a definite start, middle and end, it is in this, that this collection of photographs becomes a poignant example of men at work.

I can heartily recommend Images of War: Fighting in Ukraine – A Photographer at War to anybody with even the most cursory interest in WWII, as this book makes the absolute best of its parts, mixing hard information, with the emotion captured in a picture.

As a follower of all things WWII, I have thoroughly enjoyed this book. I am a guy that believes a picture is worth a thousand words and these books prove it. The Images of War series hit home as it tells the story of WWII in ways not really seen elsewhere. Fighting in the Ukraine is especially nice as it takes us into the Wehrmacht as it tried to invade the Soviet Union. The photos are excellent and taken by a professional photographer Walter Grimm a member a communications unit of the German Army. The author has done a great job of researching and combining these 300 photos to make a historically wonderful read. A+ all the way!