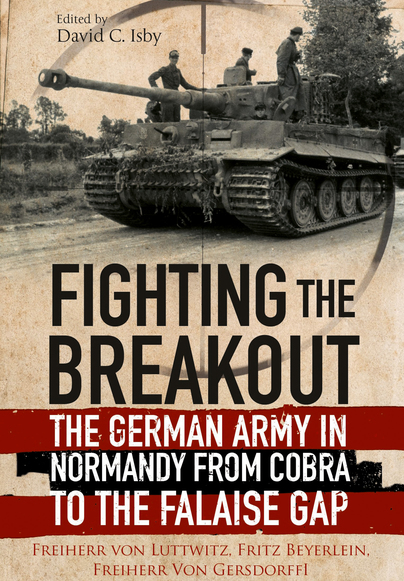 The German Army in Normandy from COBRA to the Falaise Gap

Add to Basket
Add to Wishlist
You'll be £12.99 closer to your next £10.00 credit when you purchase Fighting the Breakout. What's this?
+£4.50 UK Delivery or free UK delivery if order is over £35
(click here for international delivery rates)

This gripping volume charts the progress of the Allied breakout of Normandy through German eyes.

Beginning with Operation COBRA and ending with the offensive which led to the liberation of Paris, this critical phase of the war in the west is examined and described by five senior German officers. From staff officers at OKW to divisional generals on the ground, these officers critique their performance, examine Allied superiority, and evaluate their own efforts to contain Allied forces in Normandy. They look at such key events as the counter-attack at Mortain, the American offensive, British and Canadian efforts and the sequence of events that led to the fighting around the Falaise gap.

The officers originally submitted the reports presented here to Allied intelligence during post-war debriefing sessions. This volume brings together a selection of these reports to provide a broad overview of German hopes balanced with the realisation that they could not hope to contain the Allied efforts for long. With supplementary material by David C. Isby, this is a fascinating glimpse into how a defeated army sought hard to turn the tide of defeat.

This is an interesting and informative book from the German view of events that unfolded during this period of the war. I would have to recommend this to those that like to get into the minds of the generals that where there and their thinking.

Using de-briefing reports written by senior Wehrmacht officers for the US Army's Historical Division shortly after the war, David Isby has put together a German narrative encompassing the Allied breakout from the Normandy beachhead to the wholesale destruction of men and material caught in the Falaise pocket.

... Given the seniority and advantageous perspective of the contributors, it is not surprising that there is a wealth of detail in the book which is akin to a very long staff report. This is not a book for the casual reader but is a superlative source for researchers and students interested in this particular period.

What is apparent is the effort made to further the reputation of the superiority of the German soldier over his Allied counterparts during the war - a belief which exists to this day in some quarters. Whilst recording events, the writers bring to the fore the quality of leadership exercised at all levels and the combat abilities of its soldiers in the face of such overwhelming odds. Maybe history is not always written by the victors; certainly, in this case, it was written by the vanquished!