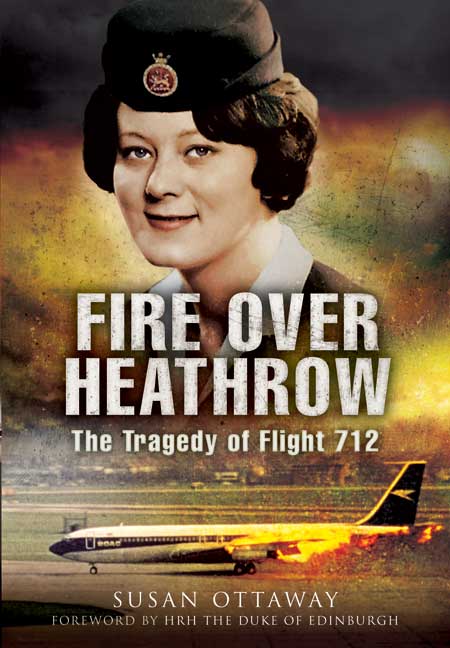 The tragedy of flight 712

Add to Basket
Add to Wishlist
You'll be £15.00 closer to your next £10.00 credit when you purchase Fire over Heathrow. What's this?
+£4.50 UK Delivery or free UK delivery if order is over £35
(click here for international delivery rates)

One and a half minutes after take-off on the clear and sunny afternoon of 8 April 1968, the Number 2 engine of BOAC Boeing 707 G-ARWE broke away from its mounting pylon and fell, tumbling in flames. Captain Cliff Taylor managed an extremely smooth touchdown about 400 yards beyond the Heathrow runway threshold and the aircraft came to a stop 1,400 yards further along the runway. The cabin crew had the doors open and passengers began escaping from the starboard over-wing exit and then via chutes at the forward and rear galley doors. Several explosions occurred and the port wing fell off, the resulting blast hurling flaming debris over the side of the aircraft. The rear escape chute was damaged by the fire and burst but, of the 126 people aboard, most of the 121 survivors had escaped before the arrival of the main fire and rescue services. Thirty-eight people received treatment for injuries and five, including stewardess Barbara Jane Harrison, were overcome by heat and fumes and died aboard G-ARWE. For her bravery in trying to rescue the remaining passengers on that day Jane Harrison was awarded the George Cross.

Fire Over Heathrow is a fascinating and informative book

This is an amazing story. Jane Harrison is still the only woman to be awarded the George Cross in peace-time and what separates her from the other female winners is that they were involved in wartime and knew that their lives were in danger. Jane went to work and carried out an act of extraordinary bravery and unselfishness. This book is a fitting tribute to Jane and the other unfortunate people who lost their lives. It is extremely well written and I would highly recommend it.