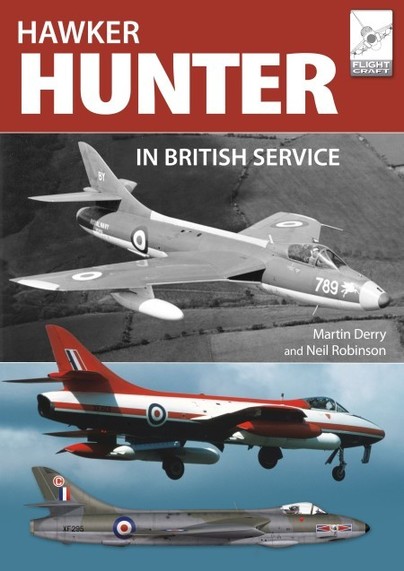 Click here for help on how to download our eBooks
Add to Basket
Add to Wishlist
You'll be £4.99 closer to your next £10.00 credit when you purchase Flight Craft 16: The Hawker Hunter in British Service. What's this?
Need a currency converter? Check XE.com for live rates

The Hawker Hunter is one of Britain’s classic post-war jet aircraft. Initially introduced in 1954 as a swept-wing, transonic, single-seat day interceptor, it rapidly succeeded the first-generation jet fighters in RAF service such as the Gloster Meteor (see Flight Craft 13) and the de Havilland Venom. Powered by the then newly developed Rolls-Royce Avon turbojet, the Hunter’s performance transformed the RAF’s day fighter squadrons from the mid-1950s until the advent of the English Electric Lightning from the early 1960s (see Flight Craft 11).

Even then, as successively improved variants of the type were produced with increasingly more capable engines and expanded fuel capacity, the Hunter successfully transitioned into a strike/ground attack fighter-bomber and fighter reconnaissance platform. Two-seat variants were developed for training and other secondary roles with the RAF and the Royal Navy and a few remained in use until 2001, albeit with specialised MoD Test and Evaluation units – well over forty years after the type’s initial introduction. Hunters were also famously used by two RAF display teams, the ‘Black Arrows’, who looped a record-breaking twenty-two Hunters in formation, and later the ‘Blue Diamonds’ as well as the Royal Navy’s ‘Blue Herons’.

The Hunter saw combat service with the RAF in a range of conflicts including the Suez Crisis as well as various emergencies in the Middle East and Far East. The Hunter was also widely exported, serving with many foreign air forces, in which it also saw active service, which unfortunately lies outside the scope of this particular publication. Almost 2,000 Hunters were manufactured by Hawker Siddeley Aviation, as well as being produced under licence overseas and will remain one of the UK’s most iconic aircraft designs of all time.

In a volume of this kind, where it can be assumed that a significant percentage of purchasers will be model-makers as well as enthusiasts, photographs and colour profiles are an important part of the content and here readers will not be disappointed.

This excellent publication is aimed squarely at the modeller, but it's wide variety of illustrations mostly in colour and previously unpublished, will certainly appeal to anyone who likes this particular aircraft.

This book is a 'must have' for the modeller and is highly recommended reading.

The authors provide an invaluable insight and guidance for the model maker into this aircraft, whilst making interesting reading for the non-model making enthusiast.

reviewed by Marco De Montis for

A must have for the modeller and highly recommended reading.

Hawker Hunter in British Service by Martin Derry and Neil Robinson is part of the publisher’s Flight Craft series, produced very much with aircraft modellers in mind. Printed on gloss paper and superbly illustrated throughout, and with nearly 50 colour side profiles of almost every scheme worn by the Hunter with the RAF and Royal Navy, this volume will have a much wider appeal.

The Hawker Hunter needs little introduction to most military aviation fans, and itsRAF and RN service is covered as part of Pen & Sword`s Flight Craft series.

Overall this book is yet another great addition to the Flight Craft series, if your planning a build in the future of pretty much any variant of the aircraft in British service then there should be something for you in this book.

First-class documentation for aircraft modelers and historians and researchers.

For any enthusiast and/or modeller of the Hawker Hunter this book will be like catnip, you’ll find yourself drooling over every page. For it is ‘every’ page that has outstanding images of this classic post war aircraft.

As you would expect for a book in the Flight Craft series, there are some kit reviews and colour schemes and markings. There’s also a detailed section of the cockpit which will aid you in your kits cockpit detail.

A beautifully written book arranged in chronological order with a lot of helpful detail for the modeller.

There's plenty to inspire you to build that Hunter.

The title of this book is succinct, and explains the contents of the book admirably. The Hawker Hunter was an important fighter aircraft in the post-Second World War Royal Air Force. It is still held in affection by many pilots and enthusiasts today.

This is not a history of the aircraft as such, but it follows the main developments of the aircraft in Royal Air Service. What makes this book so special is the range of quality photographs of the aircraft in various markings carried throughout its service. There is a whole section on camouflage and markings, which is superb. This book must be a delight for anyone modelling a Hunter as it is so comprehensive. The quality of the production of the book is very high, which enhances the photographs and drawings contained within. It is therefore, easy to recommend this book.

I had an Airfix model of the Hawker Hunter in the 1950s, just one of dozens I collected and assembled – it was what we did. Martin and Neil’s super book documents its development and service years brilliantly – this is clearly their passion!

As featured on Old Bared Wire

This new addition to the very popular Fight Craft series provides a host of magnificent specially commissioned full colour drawings and a great selection of photographic images, many never before published. - Most Highly Recommended

I love this book for its inspiration and motivation it's going to give you... fabulous ideas. Really high quality.

Each section has some knowledgeable background text though the bulk of the content is made up from both black & white and colour images of the Hunter, and all with extensive and informative captioning. The long and varied career of the Hunter remains a fascinating story, and the showcase of completed models, in various scales, show some very nicely completed models. Plenty to inspire other modellers to try more of the Hunter in its' varied career. An excellent addition to the Flight Craft series.