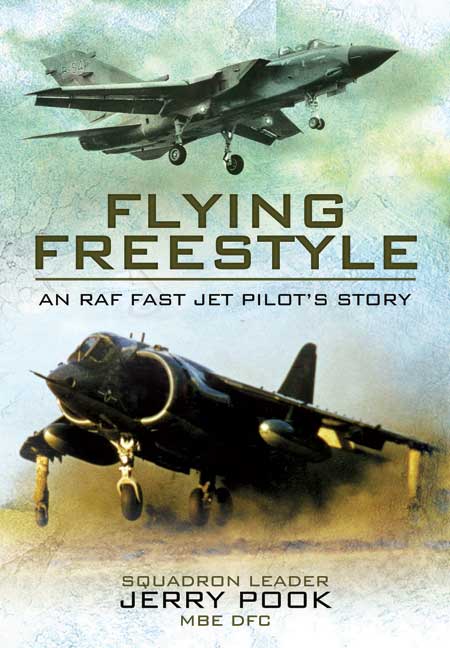 Click here for help on how to download our eBooks
Add to Basket
Add to Wishlist
You'll be £4.99 closer to your next £10.00 credit when you purchase Flying Freestyle. What's this?
Need a currency converter? Check XE.com for live rates

During a twenty-five year flying career in the RAF, Jerry Pook has flown Hunter Fighter/Ground Attack aircraft in the Gulf, Harriers in West Germany, the supersonic Starfighter with the Dutch Air Force, the Harrier in Belize, Central America and the Tornado bomber at the Tri-national Tornado Training Establishment where he trained German and Italian pilots and navigators.

Jerry had a long relationship with the Harrier Fighter/Ground Attack vertical take-off aircraft. This he flew in West Germany at the height of the Cold War operating from Wildenrath and off-base operations with Field Wing operations based in the fields and woods of the German countryside. Jerry saw action during the Falklands War when based on HMS Hermes and flying one of the few RAF Harriers in the Ground Attack role in support of
the troops fighting ashore. He then enjoyed flying the American-built Starfighter RF 104G during a 3 year exchange tour with the Dutch Air Force - he describes the Starfighter as ' beautiful to fly, smooth and sophisticated, supremely fast and powerful - if you took liberties with it you knew it would kill you in an instant.' After 3 years with No 1(Fighter)
Squadron and again flying the Harrier

he moved to the then new Tornado, flying in its bomber role. This he continued to fly operationally and in the instructional role for 13 years until grounded from military flying for medical reasons.