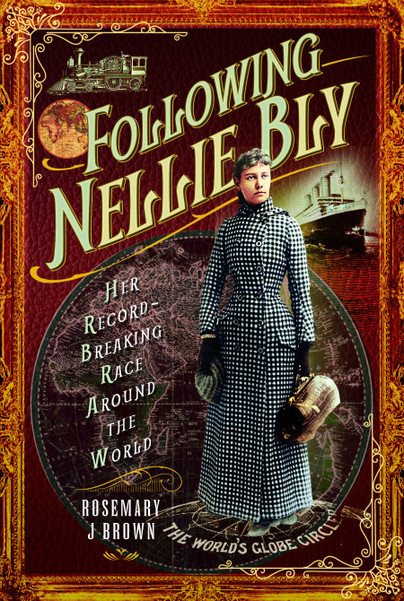 Her Record-Breaking Race Around the World

Click here for help on how to download our eBooks
Add to Basket
Add to Wishlist
You'll be £8.99 closer to your next £10.00 credit when you purchase Following Nellie Bly. What's this?
Need a currency converter? Check XE.com for live rates

Intrepid journalist Nellie Bly raced through a ‘man’s world’ — alone and literally with just the clothes on her back — to beat the fictional record set by Jules Verne’s Phileas Fogg in Around the World in 80 Days. She won the race on 25 January 1890, covering 21,740 miles by ocean liner and train in 72 days, and became a global celebrity. Although best known for her record-breaking journey, even more importantly Nellie Bly pioneered investigative journalism and paved the way for women in the newsroom. Throughout her career, Bly’s reportage gave voices to vulnerable people and challenged oppression wherever she found it. Her steadfast conviction that ‘nothing is impossible’ makes the world she circled a better place.

Adventurer, journalist and author, Rosemary J Brown, set off 125 years later to retrace Nellie Bly’s footsteps in an expedition registered with the Royal Geographical Society. Through her recreation of that epic global journey, she brings to life Nellie Bly’s remarkable achievements and shines a light on one of the world's greatest female adventurers and a forgotten heroine of history.

This is such a delightful, charming book, and I am grateful that it took me on a virtual tour in Nellie Bly's footsteps when international travel is banned from Australia. Intrepid journalist Nellie Bly decided to try to beat the fictional Phileas Fog's whirlwind trip around the world, and succeeded. She set off with only one useful dress and very little else, and travelled to several different places, including France, Sri Lanka, Japan and China. One of the highlights of her trip was visiting Phileas's creator Jules Verne and his wife at their home in Amiens, France. She often travelled in style, staying at some grand hotels, but she also had to put up with some awful conditions in various places. Nellie captured hearts wherever she went, especially in her beloved Japan .

Rosemary J. Brown set off to find Nellie, and she found her in a few places, but the world has changed so much with natural disasters, demolished buildings and other changes that it was hard to find spaces which had remained exactly the same. However, Nellie's spirits was with her, and she writes vivid and colourful descriptions of her travels. I especially love her description of beautiful Colombo, which really made me want to visit. She had a much easier time than Nellie on occasion, for example, she travels from London to Colombo in eleven hours; it took Nellie sixteen days!

Like Nellie, Rosemary J. Brown is concerned about violations of human rights, and her descriptions of executions in China both then and now will make your blood run cold. Nellie's fascination with them was rather macabre, though.

I would be happy to read this book again, and it made me want to read more about Nellie Bly.

In these days of pandemic I do miss being able to travel beyond the daily dog walks in my neighborhood. I'm glad I got to travel when I did, back in my youth - sadly those days will never return. Now, as I dream of travel, what a joy it was to encounter this book and spend time in the days of the great Nellie Bly as they are seen through the travels of Rosemary Brown. It's not possible to match Nellie's around the world trip but this was a treat for this armchair traveler.
One thing that I found fascinating that connects Nellie Bly to Rick Steves - traveling vast distances with nothing more than a carry-on. I've tried that and came up way short. So settle down in a comfy chair with a cuppa and take a mental trip in the footsteps of Nellie Bly. I enjoyed every page and was left with a desire to go back and read more about Nellie Bly.

Nellie Bly was not for the faint of heart. As a female journalist in a "man's world" she found herself sneaking into mental hospitals, exposing corruption, and completing the Jules Verne around the world trip in 72 days. In this book, author Rosemary Brown retraces Bly's footsteps for this expedition and in doing so discovers the world of Bly herself.

As soon as I saw the title of this book, I knew I wanted to read it. I’ve been fascinated with Nellie Bly for years and was excited to see a new book about her life. I assumed it was another biography, but it is actually more of a travelogue in which the author retraces Nellie’s around the world adventure. The book is part travel/cultural journal and part history, and includes a bit of biographical information, as well.

The author, Rosemary Brown, begins by talking about her love for Victorian female adventurers and “how they defied convention.” The idea for this book came to her during the winter of 2013, when she decided to reenact Nellie’s trip, although her trip would be via plane rather than by boat. Coincidentally, or not, 2014 was the 125th anniversary of Nellie’s journey around the world. It was the perfect time to retrace some of Nellie’s steps.

Brown, who lives in England, followed part of Nellie’s trip around the world, searching for her in each place she visited. In some locations, Nellie wasn’t difficult to find; in others, there was little or no trace remaining of the past. I enjoyed the author’s lively writing style and I loved learning about the history of each country Brown visited. I also found myself wanting to visit each place and have added more countries to my travel bucket list!

As a fan of Nellie Bly, and travel, I was super excited to read this book and it did not disappoint.

Article ‘On the trail of Nellie Bly’ as featured by

As featured on the ‘This Week We're Loving' page

This engaging work — part travelogue, part biography— describes Nellie Bly’s famous 1888 journey around the world and the author’s 21st Century recreation of the journey. The juxtaposition of the two trips gives readers the opportunity to learn more about Bly and see how much has changed (and how much has stayed the same) in the years since her landmark trip. Both Bly and Brown are delightful travel companions for the reader. Perfect for armchair travelers and those who enjoy narrative history or biography.

Nellie Bly is a fascinating character from history and this was an interesting read.

If only we weren't in lockdown (a common thought) because this book gave me major wanderlust and the need to be travelling again. Nellie Bly decided to take on Phileas Fogg and go around the world in less than 80 days and author Rosemary J Brown is now retracing her footsteps. It's a lovely researched book and covers both journeys. I enjoyed it from both an historical point of view and a travel book. I really want to go read more about Nellie now as well as the travelling. An inspiring read.

Interesting story. Must admit that I knew the name Nellie Bly, but knew little about who she was. As a young journalist in the late 1800s, she decided to recreate the journey from the book Around the World in 80 days. The author from present day decided to recreate Nelliés journey, including using some of her packing list. I enjoyed this one a lot, although travel books are best in short bursts for my taste. Inspirational and adventurous book. One I highly recommend.

What a cool idea!, following the steps of Nellie Bly, the greatest female journalist who ever lived, around the world in 80 days; and Nellie did it in only 72 days! She packed her bag with essentials, which included her slippers and her cold creme, wore her newly and specially made dress, and off she went. On the way, she visited Jules Verne, the author of Around The World In Eighty Days, and his wife at their home in France. From November 14, 1889 to January, 1890, she traveled around the world, visiting Italy, China, Japan, Singapore, Ceylon, San Francisco, and back to Manhattan..(only naming a few of the places she visited). The author of Following Nellie Bly, Rosemary J. Brown, traveled from September 6 to October 8, 2014, and followed her route. I was struck by the hardship of Nellie's travel by carriage and ship. Ms. Brown had travel by air. Nellie was incredibly brave and stalwart, and so dedicated to get the story, that even when saying goodbye as she was on a ship beginning her travel from New York, she swallowed her emotional good bye and left!
This is such a cool book and bravos go to Ms. Brown for her idea and her dedication. Pen and Sword Publishing puts out the best books, and this is one of them. Thank you to Pen and Sword Publishing, as well as to Netgalley for the epub. And I have to mention that Ms. Brown raised money for UNICEF through her travels...again BRAVO!

Where to begin with this wonderful book? Nellie Bly was an extraordinary female American journalist who, at the age of 25, wished to traverse the world in less time than Jules Verne's Phineas Fogg's 80 days. But in 1890 a young female traveler was absolutely unheard of and that fact presented a few challenges. Nonetheless, Nellie persisted and visited each continent in 72 days. As a rabid traveler, I completely understand the allure, though after months away I never wish to return home! The author, Rosemary Brown, chose to undertake the same route 125 years later, though of course encountered many changes in sites/sights Nellie saw and many buildings no longer exist, though some did. What a fascinating challenge! This book is the story of Nellie, her legacy, her pioneering spirit, her taking on difficult situations head on as well as the author's quest to emulate the journey with the same winsome spirit.

Nellie was a light packer. In fact, her gripsack would be the equivalent of a carryon for us. But she was fearless and went. Her adventures left me breathless from seeing exquisite gems to visiting Jules Verne to experiencing new-to-her cultures to her frustrating delays to a lighthouse to execution grounds and cemeteries to temples and monkeys to orchid houses. Her homecoming is detailed here as well. What I knew of Nellie was her asylum research and fight for the poor and did not realize she traveled the world as well! The list of items she packed is amazing! And such fun to read about. There are many lovely and descriptive quotes of hers in this glorious book. Oh, how I would have loved to have known her! But this author makes me feel I practically do.

You will learn a lot about engaging Nellie Bly and her personality by reading this book. It is fabulously interesting especially if you are intrigued by world travels, women's independence in the Victorian age and the undertaking of a contemporary woman in her footsteps. This book prompted me to read more on Nellie Bly so I have requested books from the library.

Nellie Bly is an amazing woman, born way before her time. From living in a mental asylum for a story to travelling the world in under 80 days. Truly a remarkable woman.

Journalist Rosemary J Brown writes for publications in the UK, USA and France. In her quest to get female adventurers like Nellie Bly ‘back on the map’, she lectures at the Globetrotters Club, Women of the World festivals and schools, and helped to organise the first Heritage of Women in Exploration conference at the Royal Geographical Society.

Nellie Bly – born Elizabeth Jane Cochrane – was born in on 5 May 1864 in Cochrans Mills, Pennsylvania.

The death of Nellie Bly