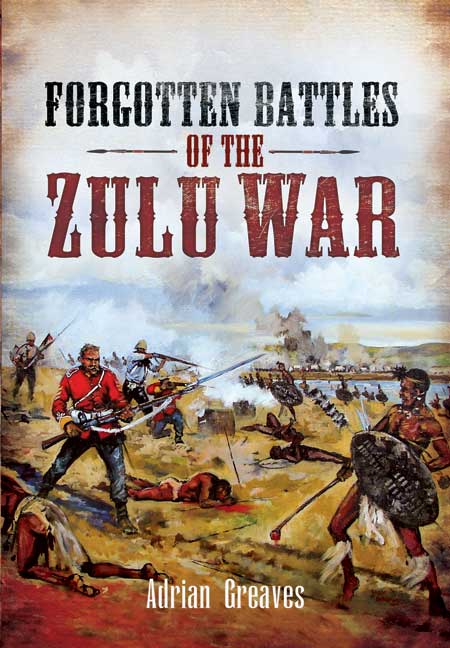 Click here for help on how to download our eBooks
Add to Basket
Add to Wishlist
You'll be £4.99 closer to your next £10.00 credit when you purchase Forgotten Battles of the Zulu War. What's this?
Need a currency converter? Check XE.com for live rates

In Forgotten Battles of the Zulu War Dr Adrian Greaves uses his exceptional knowledge of the 1879 Anglo-Zulu War to look beyond the well-known disaster at Isandlwana and the iconic action at Rorke's Drift to other fiercely fought battles. In so doing, he covers little recorded engagements and battles such as Nyezane which was fought on the same day as the slaughter of Imperial troops at Isandlwana but has hitherto been eclipsed by it: likewise the battles at Hlobane and Gingindhlovu. The death of the Prince Imperial, which caused shock waves round Europe and had serious repercussions for those involved, is examined in detail. Close scrutiny of the defeat of the Zulu Army at Ulundi reveals new and shocking details about the battle which proved to be the culmination of the war.

There is more than a hint of ominous events to come in the slaughter of Colonel Austruther's Redcoat column by Boers as they marched from Ulundi to Pretoria. This was the opening salvo of the First Boer War. This fresh angle on a dramatic period of our Imperial history from such an authority on an ever popular war will fascinate both experts and laymen alike.

I feel like I learned a lot. Maybe I dint learn that much about the battles per se, but more about general attitudes, how we reflect on things we’d rather not remember, and sadly, that it seems like we don’t even want to live and learn. The way the British leaders didn’t give any straight answers about why they went to war and what went wrong makes me think the leaders of today are not that different. Doubt we’ll get any clearer answers today...

All in all a great book. However, I would encourage readers to read about “the well-known” history, wars, and stories from that time first, to fully understand the meaning of this brilliant and educational book.

This work is enhanced by excellent maps and illustrations from one of the best historians of the war.

Adrian Greaves has done it again with his 'Forgotten Battles of the Zulu War'. Like all his other books,it is honest and straight forward, great prose with vivid detail. Here we find how the Zulu War was really fought. With no punches pulled he details the heroes from the villians and cowards like no other author. I knew about these forgotten battles but not in the detail that Adrian portrays.
I have two other books by Adrian Greaves both brilliantly written, I will be buying more of his books until I have them all.
Thanks Adrian, a great read.

This book was far better than I expected and one of the best books I've read on the Zulu Wars. The tale of these forgotten battles of the Zulu war is captivating and very detailed. The book is a must buy for the understanding of the zulu war, which is much more than Isandlwana and Rorke's Drift. The only criticism to make of this excellent work is the absence of maps of the battles, the descriptions are highly detailed but would benefit a lot with a few maps.

Each action is fully explained in good detail and in a lively, engaging style. There is an end piece as well to each action acting as an overall evaluation, both of the direct action and its impact on the overall conflict.
The book is an excellent read and is being offered at a special introductory price. It will certainly give the diorama modeler plenty of ideas for new models and vignettes and will be of huge interest to the military historian.
This is a cracking read well researched, hugely enjoyable, well written, attractively priced.......can't you tell I loved it?